[German]Since the beginning of September 2018, users of store apps on Windows 10 have been running into the problem that the error 0x800B0100 is displayed during the app installation during the update. Microsoft has now admitted a problem and wants to correct the apps in the store.

The error code 0x800B0100 stands for TRUST_E_NOSIGNATURE, i.e. the program has no or no valid signature. The error seems to have occured during the installation of Store Apps under Windows 10 last week more often. This thread can be found at reddit.com.

I have two laptop and on one of them I got an error message that I couldn’t update the HP Smart app. My other laptop didn’t have this problem and was able to update the app without problems. The error code I got when the update problem started is: 0x800B0100

-use the windows update and windows store troubleshooter

I’m really lost and would be very grateful if anyone could give me any hints on how to solve this.

On a notebook, the app from the store returns error 0x800B0100 when updating (or installing) the notebook, while the other device does not return the error. Another user confirms a problem with the App Penbook. Here is a screenshot of this error dialog posted within a Microsoft developers forum). 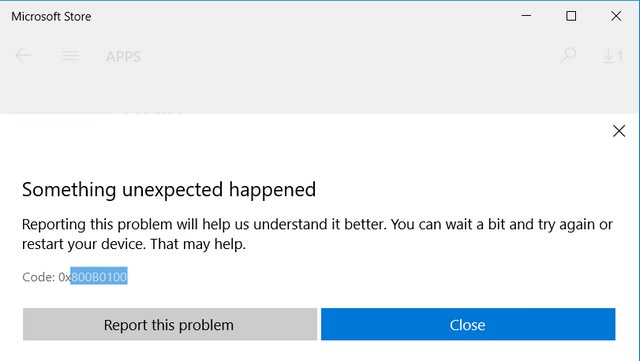 Also on Twitter a search for this error code returns a lot of hits.

@donasarkar I PAID MONEY IN THIS APP AND WILL NOT INSTALL ERROR CODE 0x800B0100 pic.twitter.com/NJQGgOwYgb

In the above tweet, for example, a user complains to Dona Sarkar that an app he purchased is not installable. Last Thursday, developer Rudy Huyn (see following tweet) confirmed that Microsoft Store actually displays error 0x800B0100 when downloading certain applications.

A lot of apps have been having this issue since Friday. If you can’t download an app in the Store and receive the 0x800B0100 error code, it’s a bug related to the #MicrosoftStore app, close it and run WSRESET.exe, it will clean the Store local cache and fix your issue.

He stated that a bug in the Windows Store was responsible for this. A short time later, he added that Microsoft had fixed the bug and automatically regenerated the store apps.

UWP developers, if your application was not downloadable (0x800b0100), good news, first, you did nothing wrong, it was a bug related to the Store. Microsoft fixed the issue and automatically generated a new package of your app (ending with .1000 or .1070). pic.twitter.com/qFnYRYNiHo

We are sorry about this failure and are actively working on mitigating it. We have tracked this issue to our submission workflow incorrectly signing certain apps. [We need] to re-process the impacted apps in order to alleviate the problem. While we have already re-processed a few apps, […] we’re working to ensure that every impacted app is fixed.

Microsoft has determined after investigation that certain apps were not signed correctly. Therefore, the company wants to re-sign the affected apps and post them in the store. This should fix the problem with the app installation.

Addendum: If you still get this error, maybe the tip for the tweet below will help: Close the store app and run wsreset.exe in console window.

Since Friday, apps have been having issues. If you can’t download an app in the Windows Store and receive the 0x800B0100 error code, it’s a bug related to the #MicrosoftStore app. Close it and run WSRESET.exe, and it will clean the Store local cache and fix your issue #TechTips

This will clear the store cache and the app downloaded again should contain a valid certificate. Were any of you affected?

This entry was posted in issue, Windows and tagged 0x800b0100, App, Error, Windows 10. Bookmark the permalink.

1 Response to Microsoft reprocessing store apps due to error 0x800B0100