[German]Microsoft has re-released the Windows 10 October 2018 Update (Version 1809) to the public on November 13, 2018. Here is some information about this re-release.

Two days ago I had pointed out in the article Windows 10 V1809: Re-release on Nov. 13/14, 2018? that Microsoft could release Windows 10 V1809 again on 13th Nov. 2018. This version had already been released on October 2, 2018, but had to be withdrawn due to numerous bugs (see links at the end of article). In October, numerous updates were tested in the Insider Preview program.

In addition to ‘extensive internal validation’, Microsoft has taken the time (in fact a month) to closely monitor the feedback and diagnostic data from our Windows insiders and the millions of devices on the Windows 10 October 2018 update. Microsoft has received no further evidence of data loss there.

Based on this data, Microsoft will immediately begin re-releasing the October update. The rollout takes place as usual in waves – but this time with the handbrake pulled:

Users who want the function update to Windows 10 Version 1809 from earlier versions must check the settings page for updates. Then the update should be offered (if the machine is compatible).

As with earlier versions of Windows, Microsoft checks the results, feedback, and diagnostic data that come back from those installations. In the coming weeks and months, this Windows build will be offered in a phased update for additional devices.

While Microsoft was very proud with Windows 10 V1803 that its rollout was running at the highest speed since the introduction of Windows 10, the already mentioned handbrake was put on (due to the October disaster). Microsoft now wants to pursue a more moderate and slower rollout in order to examine the telemetry data of the devices more closely.

In other words: Microsoft will offer Windows 10 October 2018 update via Windows Update only on such machines, if their telemetry data shows that the device is really ready for the feature update. If Microsoft detects that the device has a problem, such as application incompatibility, it will not offer the update for installation until the problem is resolved. This also applies if the user has “Check for updates” on the settings page.

Where can I get the installation images?

Fire up your browser an visit this web site, where Microsoft will offer the download of Media Creation Tool (MediaCreationTool1809Oct.exe). This tool creates an install image as an ISO file or on a USB stick. But the ISOs are also directly available for download on the Microsoft servers. I ‘ve described the trick, how to download the 32- or 64-bit ISO images directly in the browser (see my blog post Tip: Windows 10 ISO direct download from MS via Chrome). 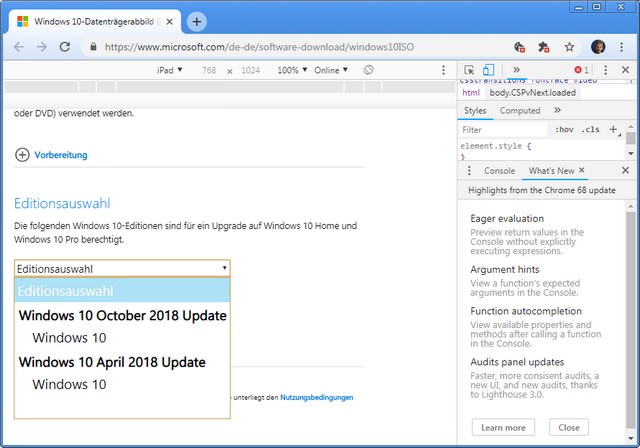 The screenshot above shows that the ISO file for the Windows 10 October 2018 update is offered in the Chrome browser (which I switched to iPad emulation). After selecting the edition and the language, the 32- or 64-bit ISO can be downloaded. 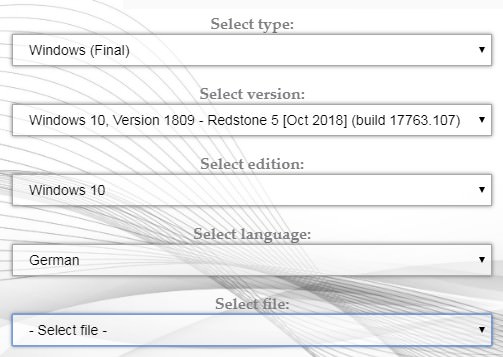 It might be easier to use the Adguard website (see screenshot above). There you can download Windows 10 V1809 Build 17763.107 from the Microsoft servers by selecting “Windows (Final)” in the form fields.

Once Windows 10 V1809 Build 17763.107 is installed, Windows Update rolls out a cumulative update KB4467708 that raises Build 17763.134. This fixes various issues with UWP apps and logging into the Microsoft account. In addition, another subclass with ‘protection mechanisms’ against speculative side attacks (Spectre) is installed.

For people who install cumulative updates as manual downloads (have to or get them from WSUS), the notice that Microsoft has again provided an updated Servicing Stack Update (SSU) B4465664. This must be installed before installing the cumulative update. According to this comment, there may be BlueScreens with the new builds – I haven’t tested anything yet.

In some cases, Microsoft Notepad or other Win32 programs cannot be set as the default.

In some cases, attempting to set application defaults again will succeed.

Microsoft is working on the problem and estimates that a solution will be available by the end of November 2018. So, I hope to have catched the most important things. Ok, a last tip from me: Wait with upgrading to Windows 10 V1809 until the dust has settled.

This entry was posted in Update, Windows and tagged Windows 10 V1809. Bookmark the permalink.