[German]Microsoft's Office365 business customers are facing an outage of Microsoft's Office365.com service since January 24, 2019. Exchange Online is partially not reachable, so email can't be send or received. Today (Saturday, January 26, 2019) a status update about that outage.

I blogged about the outage of the Office365.com services that began early in the morning of January 24, 2019 in the blog post Office 365 down (January 24, 2019)? First it seemed that the issue hits only Europa, Africa and Middle East (EMEA) und went away on late Thursday evening. But on early morning of January 25, 2019 more and more users are facing again issues with Exchange Online and related Office365 programs.

Later I learned, that not only the EMEA region was affected. Also customers in USA are facing outages in Office365.com services since January 24, 2019. An article at Bleeping Computer addresses the issue on January 25, 2019 (the 2nd day of the outage).

The map shown above are quite interesting and gives us probably some insights. It is conspicuous that there are only certain centres where the fault reports of the users accumulate (can be recognized by a coloring on the map above). There are two explanations for this:

"We've determined that there is higher than expected queuing within the authentication infrastructure, which may be the cause of impact. We're working to identify the cause of these queues and determine steps to remediate impact."

Also explains why Exchange Online seems to work at night when few people use it.

What does Microsoft say about the issue?

What I find interesting is how Microsoft communicate the outage. After all, the company is forcing its user to move to the cloud (I've just written a German blog post Office 365: OneDrive ab Februar 2019 als Speicherziel, dealing with Microsoft's yesterday's announcement, to use OneDrive as default storage location in Office365 after February 2019). On the other hand, a service that is essential for working with various Office365.com features has been down for at least two days. At least, Microsoft has issued a statement to Bleeping Computer by a Microsoft spokesperson:

"We're working to resolve difficulties a limited subset of enterprise customers in Europe are experiencing when attempting to access Exchange Online. Consumers are not affected. Admins can find status updates on the Admin Center."

The second part of the statement says, that administrators can find information in the Office365.com Admin Center about whether the malfunction exists. Bleeping Computer reports that several administrators (from the USA) indicate that the malfunction EX172491 can no longer be found in the Admin Center. But that doesn't mean anything. I got feedback from admins, reporting, that everything was fine, whilst others are shouting about the outage.

During writing this blog post today I've called the site downdetector.com (Saturday, January 26, 2019, at 11:59 a.m., European Time). The number of complaints about the outage decreased, as expected, in the night of 01/26/2019. Only at 11:00 o'clock I saw a fault report. Could be interpreted that the outage has been solved. But we can't be sure because it's the weekend. So I took a look at the card with malfunctions provided by downdetector.com. 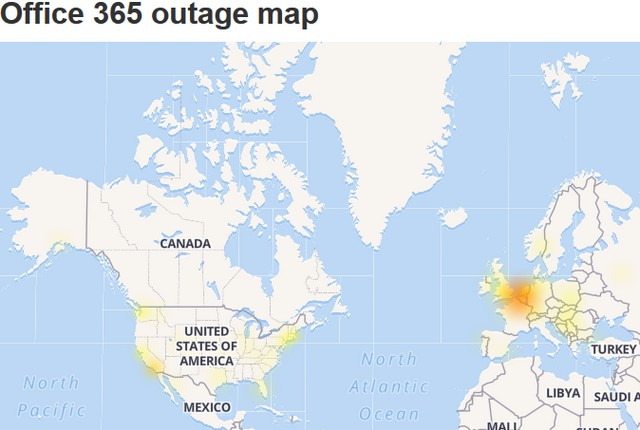 The above map from downdetector.com shows at 11:00 o'clock (01/26/2019) some outages in Europa and some in USA. I interpret it in a way, that the Office365.com/Exchange Online outage isn't over. And the Microsoft statement about a subset of affected enterprise customers in Europe is simply not true. What's your experience? Ist office.com still down or back in operation?