A weak design of the Surface Dock is causing, that a Surface Book 2 is not supplied with power from the dock under heavy load (e.g. gaming). The device will drain then the battery.

The Surface Dock is an additional component, which is supposed to transform the Microsoft Surfaces into a 'full desktop system' – so the Amazon display shown below. 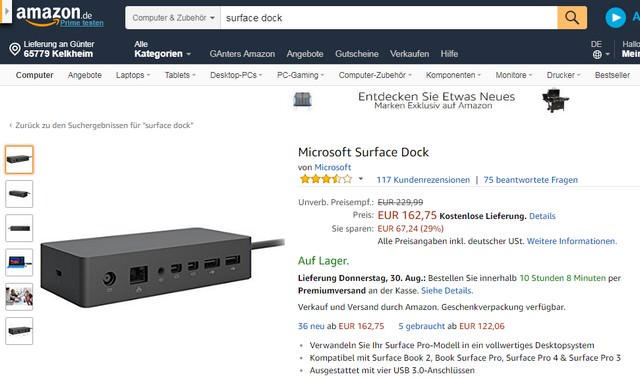 In addition to various USB sockets and connectors, the Dock also provides a power supply for a Surface. However, the Dock is probably not able to supply power to Surfaces properly. Last year I had already pointed that out within my the blog post Microsoft Surface with depleted Battery can't charge via Dock. A Microsoft Surface with empty battery is not rechargeable at the Dock.The dock's power supply simply doesn't produce enough energy.

If a Surface Book 2 is operated under load (e.g. gaming) on a dock, there are also issues with the power supply. The Surface Book 2 draws its power from the battery, instead of the dock. So the battery then quickly runs out of power. MVP colleague Barb Bowman mentioned that within following tweet.

The tweet references this Microsoft Answers forum thread, where a  user complains about a Surface Book 2, that's being constantly unloading the battery at the dock::

I am really pleased with the performance of the MS Surface Book 2 for gaming. The GTX 1050 is a good card for the screen size when you turn the resolution down a little bit. Everything works well when plugged into the supplied wall charger, however when I plug into my Surface Dock and try to play games, Battery 2 (The Base Battery) drops to 4% within 20 minutes of gaming and the GTX1050 automatically disconnects, making the game hang.

I see that the Dock power supply is 90W and the power supply with the Surface Book 2 is 102W. Would it make such a difference?

So during gaming, the Surface Book 2's base battery is emptied with 20 Minutes to 4 %, although the device is connected to the Dock. A Microsoft agent answered:

thank you for posting us here in Microsoft community!

Surface Dock supplies 90 watts of power. Surface Book 2's inbox charger supplies 102 watts. If the device is under heavy use, and using more than 90 watts of power, the Surface may be running off of battery power. As such, the power setting is not recognizing the dock's power connection.

In this case, we suggest that you may use the inbox PSU and use USB-C for external devices to work around with this concern.

Again a worse design of the Surface Dock makes it useless, if the Surface Book 2 is used under heavy load. Well done.

This entry was posted in devices, issue and tagged Surface Book 2. Bookmark the permalink.