[German]It is reported, that Mozilla had to stop the rollout of the newly released Firefox 66 browser. The reason is an incompatibility with Microsoft PowerPoint Online.

Firefox 66 was released on March 19, 2019 as a maintenance update which adds new features like the Auto-Play-Stopper for videos. An update is also recommended, since this version closes 20 vulnerabilities – partly classified as critical,.

Rollout stopped due to PowerPoint bug 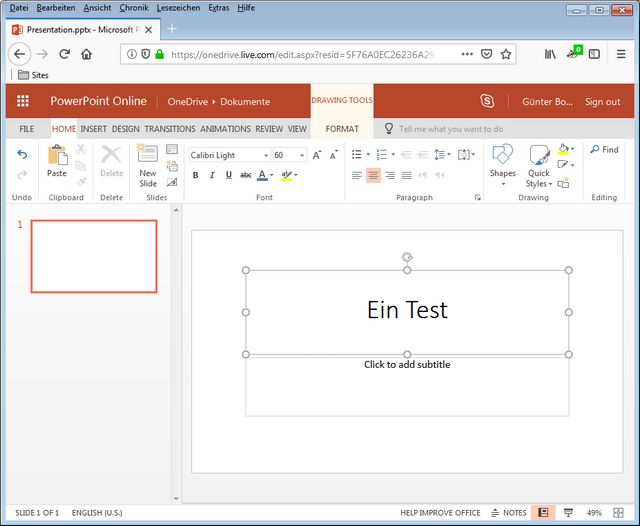 But if you type a text in the fields of a slide, the text in the fields disappears automatically after pressing the input key. You cannot add text to text fields. I tested it with PowerPoint Online. As soon as I press the Enter key to complete the text entered in the image above, an empty field is displayed. It's even enough to resize the browser window to make the text disappear. In addition, the content is not included in the slide overview on the left.

A fix and a workaround

Mozilla is currently testing a fix in its Firefox Nightly Builds. Until this fix is released, the developers have stopped the rollout. Once the fix has been properly tested, Mozilla will distribute it via Auto-Update.

Anyone who has already updated Firefox to version 66 or installed the new browser, but dependents on PowerPoint Online, can use a workaround. Enter about:config in the address bar of your browser and confirm the Firefox notification, that you are aware of the risks. Then search for:

and select the entry by double-clicking it. Then enter the value powerpoint.officeapps.live.com in the displayed text box. 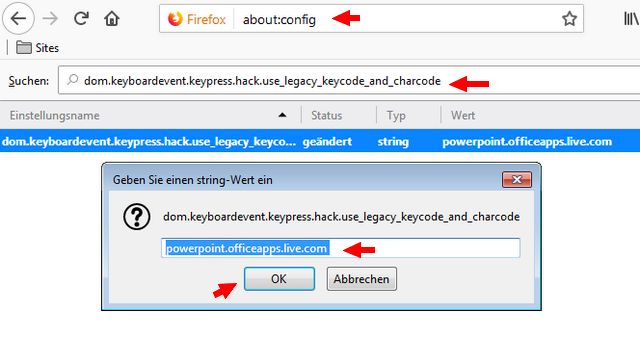 Techdows write 'You can then reload the PowerPoint tab for change take effect.' But it didn't work in my test – I had to restart Firefox completely. Maybe it will help you.

This entry was posted in Software, Update, Windows and tagged Firefox 66, Office. Bookmark the permalink.