[German]After massive protests, Microsoft seems to be rethinking and trying to restore the blog posts that were deleted on Technet and MSDN during the hiring of employee blogs.

Microsoft recently started a kind of major cleanup of its web content. The old employee blogs in Technet (and MSDN) were deleted. These were often used by employees to explain a new technology and communicate with developers. With the deletion action, 15 years of employee knowledge buried within those blog posts were lost. At the same time, many older KB articles were also deleted.

I notice this because the links from my blog posts to these Microsoft pages break. Since a plugin in the blogs continuously checks all links for validity, this is indicated to me with some delay. I recently had reported this within my German blog in a post titles Das Internet vergisst nichts? Von wegen! Microsofts-Aufräumarbeiten.

Microsoft rethink that after protests

After the cleanup action, when the ‘community’ noticed this, there were probably massive protests of the customers and also of the employees. Because an enormous knowledge of the former employees, which was stored in the blog posts, was simply lost. And the Microsoft blogs are not replicated anywhere else. In addition, there was often a lot of knowledge in the comments on these articles. The cleanup action was – in my eyes – simply stupid of the Microsoft decision-makers.

Thank you for your patience, we have now re-activated thousands of MSDN and TechNet blogs while we continue to work on the longer-term blog archive.

Due to these protests, Microsoft very quickly decided to undo the cleanup action and restore the deleted Technet posts. The above tweet announces the execution.

But things are  still stuck

The problem with the above delete and restore operation: Apparently there was no backup, but you had to restore it from any backups. There is a risk that parts will be lost or that the structure will not return in its old form.

MSDN recently deleted thousands of MS blogs, as part of a huge housecleaning project. Except for backups and partial wayback caching, 15 years of employees’ thoughts and pictures and answers and lives are gone.

Now I feel crummy talking about it

Microsoft employee Ned Pyle addressed this in the above tweet and pointed out the consequences. The knowledge and ideas of 15 years have disappeared in the digital hurricane. He wrote that some should be re-imported, but doubts that it will work out. The problem: Some of the authors of contributions have died or are no longer in the company. In addition, Microsoft employees who worked there as authors can no longer be identified by their e-mail addresses.

On Twitter some of those affected are therefore missing individual contributions or entire categories. If you go through the tweets, there is a mixed picture. Some blog categories, which were criticized as missing and linked, are now availble again. Whether these are complete, I do not know. Microsoft is still working on a long-term archiving solution that keeps the information accessible, as MS Power User writes in this article on the subject.

Regardless of Microsoft’s efforts to restore the content, there is an archived version of the blog posts that a user has saved on OneDrive. I came across this approach at askwoody.com, user 1ST1 also linked it in a comment within my German blog. 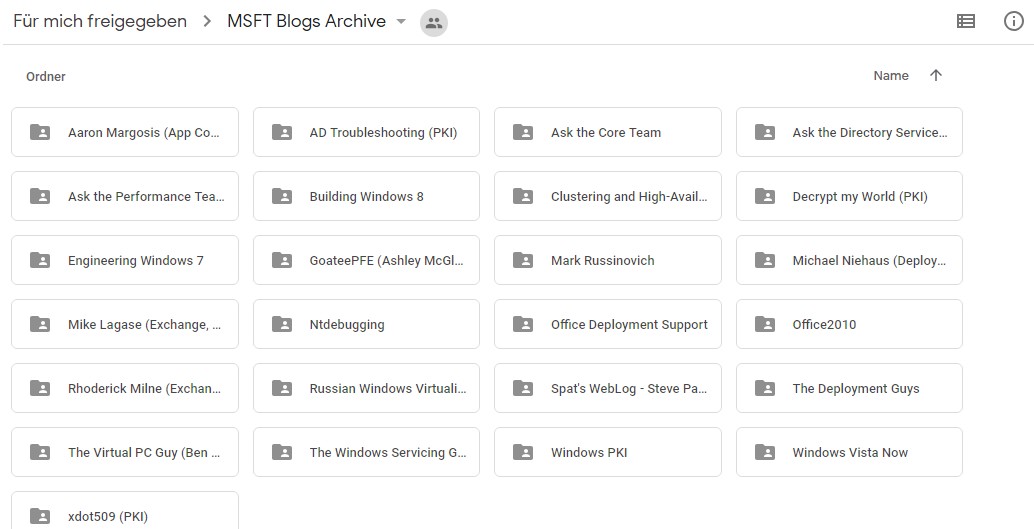 An anonymous user with the alias Coyote has not only previously saved the contents of the deleted blogs. He has provided an archive with the articles in HTML and PDF format on this online drive for the public. However, the handling is not exactly optimal. It’s not without a certain irony that Microsoft content is saved on a Google drive to protected it from digital oblivion. Maybe the user didn’t trust Microsoft and OneDrive – or the memory was too small there.

This entry was posted in General and tagged Microsoft. Bookmark the permalink.