[German]Microsoft has begun the global rollout of the Windows 10 May 2019 update on May 21, 2019 (3rd Tuesday in May). Windows 10 V1903 is now officially available and can be installed via Media Creation Tool or via update search as a feature update.

German blog reader Alex dropped me this night a comment (thanks) that the file MediaCreationTool1903.exe is available for download and that the feature update to Windows 10 V1903 may be initiated via Microsoft's homepage. 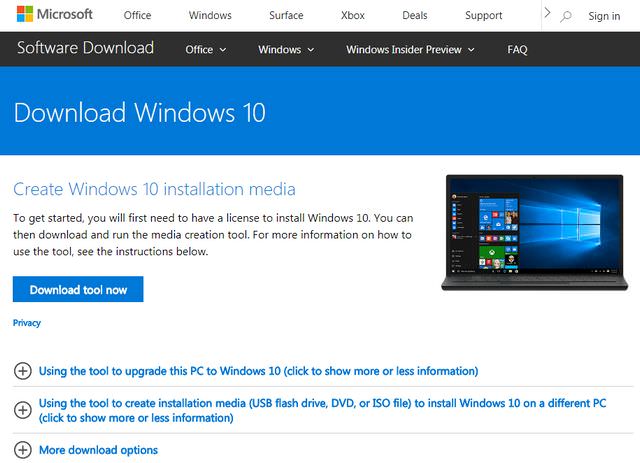 Microsoft has officially released the MediaCreationTool1903.exe, with which you can officially download an installation image of the Windows 10 May 2019 Update (V1903) and create an install media on a DVD or USB stick. Simply click on the Download tool now button on this website.

Have a look at Windows 10 October Update (Version 1809): (Upgrade-) FAQ. There I briefly describe, what to know about Windows Media Creation Tool to download an install image.

Important: The Media-Creation Tool currently downloads Windows 10 Build version 18362.30 (also available at ISO-Download – see below). If you create an installation medium with this build, you can't install Windows 10 with this medium with attached USB data carriers and SD cards.

As a workaround you can save an ISO file in the Media Creation Tool. This file can be mounted under Windows 10 in the Explorer as a virtual drive. Then you can start the setup.exe from this virtual drive in order to install the feature update.

During the setup, allow the check for updates and after the installation check again for updates until nothing more is found. This will update Windows 10 Version 1903 with the required updates to correct various errors.

On the Windows 10 website, Microsoft points out that also ISO installation images are available from the MSDN Subscriber Portal or Volume Licensing Service Center. But that's not an option for all users. 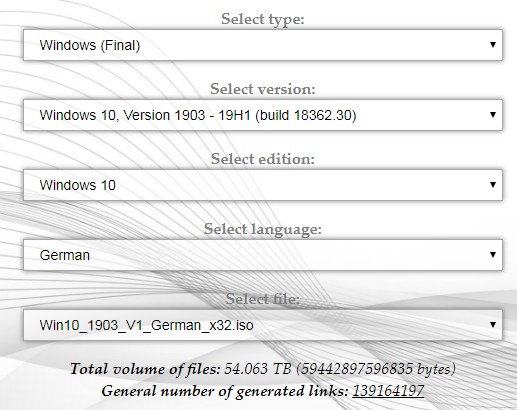 Consumer or small enterprises (without access to Volume Licensing Service Center) may us the Adguard website, to obtain a download link for a Windows 10 V1903 32 or 64 bit ISO file directly from Microsoft's servers. A form allows you to select the appropriate Windows 10 edition in a comfortable way.

Adguard uses the features provided by Microsoft for direct download (formerly Techbench program) and accesses the links to the Microsoft servers. If the ISO file exists, the download parameters including SHA1 hash and a download button for download are displayed. However, the link is only valid for a short time because Microsoft only temporarily generates the downloads on its own servers for a few hours.

If you want to download the ISO file without using Adguard, for example in the Google Chrome browser, you can use the trick I described in the blog post Tip: Windows 10 ISO direct download from MS via Chrome. 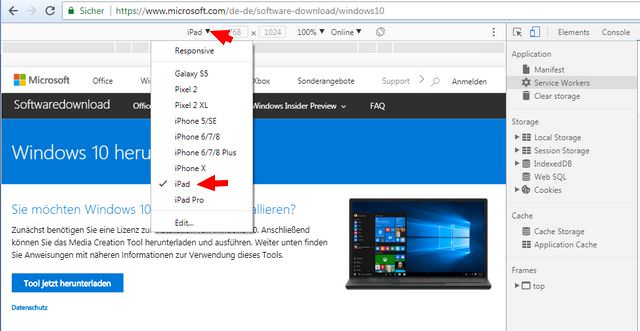 Within this comment (thanks for that) German blog reader Guido has confirmed that he has been offered the feature update to Windows 10 V1903, and he was able to upgrade.

Hello, after I successfully downloaded the update KB4497934 Windows 10 1809 17763.529 from 21.05.2019 and installed KB4497934 I got a message under Windows Update Search asking, if I want to update to version 1903. I did this and the feature update was downloaded and installed without any problems. I took a look at the new features and tested some of them. It seems that everything works.

If you are ready and would like to install the latest release, open your Windows Update settings (Settings > Update & Security > Windows Update) and select Check for updates. Once the update appears, you can select Download and install now. But note, that not all machines will receive that option in an early wave.

Windows 10 Version 1903 should be availabe in WSUS or SCCM. Microsoft states that this is the semi-annual channel release and IT administrators should test the compatibility of their infrastructure. On 21 May 2019, the 18-month support period for this Windows version will also start.