[German]Microsoft has released the Media Feature Pack for Windows 10 N version 1903. This is relevant for users, having this version on their machines. Here is some information about this topic.

Windows N is the version of the operating system without media player and media functions. It has been offered by Microsoft (under pressure from the EU competition authorities) for years. N stands for no media features. Also for Windows 10 there is a so-called N-variant – Windows 10 KN is a reduced version developed for Korea without media features. In practice, I think that OEM manufacturers do not offer Windows 10 N installations. Usually, it is students or other users who at some point will be able to purchase a Windows 10 N installation at a reasonable price.

Who needs the Media Feature Pack and why?

This Microsoft site lists further functional limitations of the Windows 10 N version. Only by installing the Media Feature Pack are the missing functions retrofitted and it is, for example, possible to import photos or display PDF documents again.

Where can I get the Media Feature Pack? 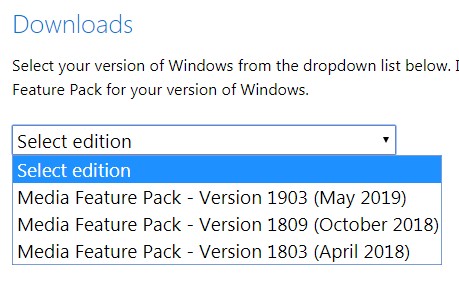 Select the appropriate download for the 32- or 64-bit package that matches the installed Windows 10 N. Then select the downloaded file with a double click and install it. At the latest after a restart of the system the media functions should be available.