[German]Interesting information for users of Windows 10 machines still running April 2018 update (version 1803) or older. Systems with this and earlier Windows 10 versions will be forced to upgrade from summer 2019.

Windows 10 April 2018 update released in April 2018 will be discontinued on November 12, 2019 in the Home and Pro versions (see the table below, which was taken from the information sheet on the Windows life cycle). 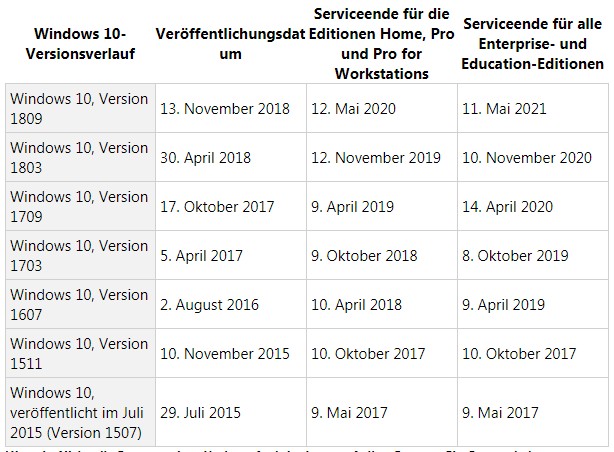 After this date, these builds will no longer receive updates. Only Enterprise editions will be supported until November 2020. Older versions of Windows 10 have already dropped out of support in Home and Pro, and some Enterprise versions will also be out of support this year or have expired.

The information can be found in this Microsoft document, which was published to announce the Windows 10 May 2019 update. There it says:

For Windows 10 devices that are at, or within several months of reaching, end of service, Windows Update will automatically initiate a feature update; keeping those devices supported and receiving the monthly updates that are critical to device security and ecosystem health. The Windows 10 April 2018 Update (Windows 10, version 1803) will reach end of service on November 12, 2019 for Home and Pro editions. Starting this June, we will begin updating devices running the April 2018 Update, and earlier versions of Windows 10, to ensure we can continue to service these devices and provide the latest updates, security updates and improvements. We are starting this machine learning (ML)-based rollout process several months in advance of the end of service date to provide adequate time for a smooth update process.

In short: Because Windows 10 Version 1803 reaches the end of support for the Home and Pro versions in November, Microsoft will be forced to update the corresponding clients with a function update from June 2019. Microsoft doesn't say which version it will update to, but I suspect it will be version 1903. The same is true for older versions of Windows 10 that are still used by users.

Microsoft wants to ensure that these machines will continue to receive updates even after the end of support. The process of forced updates is initiated early and supported by a rollout accompanied by machine learning.

Until now, new feature updates for Windows 10 were immediately downloaded and then installed via Windows Update when available and released by Microsoft for a machine. As of May 2019, Microsoft's approach will change, as you can read in the blog post Windows 10 May 2019 Update brings back Update control.

Only when a machine with an installed version of Windows 10 drop out of support Microsoft 'pull the reins'. A special condition applies to machines that have a Windows 10 build installed that has reached or will soon reach the end of support with updates. If the feature update is pending because this machine appears compatible, Windows Update will install it automatically. The mandatory upgrade is designed to ensure that the machine continues to receive security and quality updates.

This behavior has been added with the KB4497934 and KB4499183 updates for Windows 10 Version 1803 and Version 1809 for May 21, 2019. Older versions of Windows 10 did not receive such an update. This is also not necessary, since these versions in Home and Pro versions have already dropped out of support. If Microsoft provides a feature update for the machine, this is installed automatically – nothing changes compared to the previous behavior.

This entry was posted in Update, Windows and tagged Windows 10. Bookmark the permalink.