[German]Currently, there is an increase in the number of malicious banner ads that open fraudulent web pages in the standard browser when starting or using apps on Windows 10. Here are a few details what is know so far.

Users of some Windows 10 apps, such as MS News, probably received unwanted ads since Friday that redirected users to websites that reported that they had won an iPhone, or the system has been infected with viruses – which is nonsense in both cases. 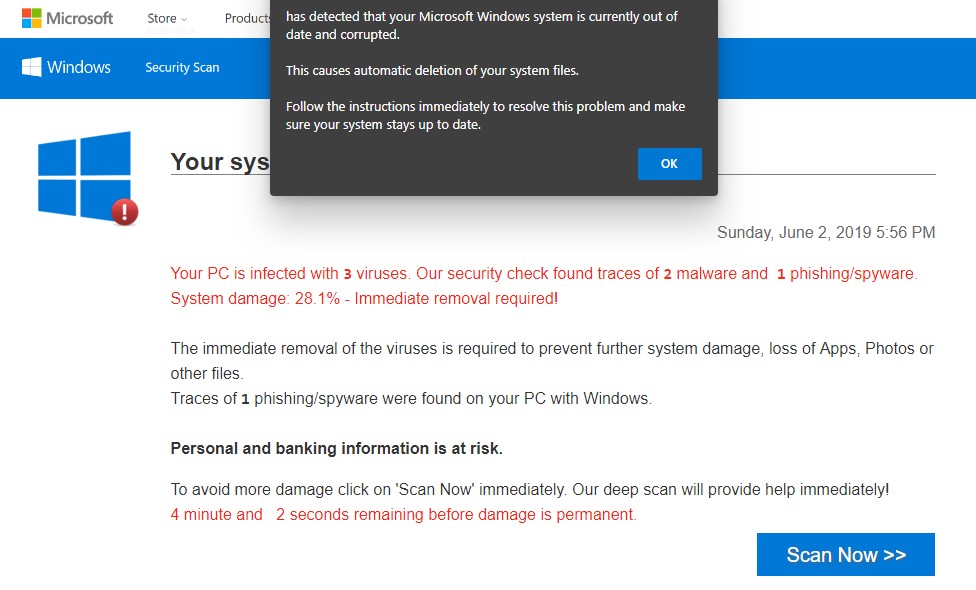 Above is such a fraudulent banner ad. The goal of these fraudulent ads is to tempt user to divulge his data or to download a useless tool.

A feedback from a reader

German blog reader Michael W. informed me by e-mail of a problem with Microsoft's Windows 10 apps – but it had also seen reports on the internet. Michael wrote:

On Friday, I had Firefox tabs at my workstation PC that opened several times with the well-known "sweepstakes": "Dear Telekom user, you are a possible winner of a device X model Y". Other pop-up pages were blocked on the server side with disconnection.

First, I suspected eBay of delivering bad ads again. After I closed the eBay pages in Firefox, Chrome and Edge, pop-ups (tabs) continued to appear. By the way, the Windows 10 News app was open, and look, every time a news item was called that was "accompanied" by advertisements, the dubious banner ads popped up again.

Then I got a call from my neighbor yesterday morning, he had fades in that his tablet was infected with viruses – since Friday. So I counted 1+1: In various Microsoft games, but also in the news app installed afterwards, Edge tabs with polls, sweepstakes, but also again the virus contamination pages appeared.

The root cause for these malicious ads insertions are Microsoft apps like the News app, but also games. At German site Dr. Windows is a long thread, where Windows 10 users are discussion about that issue.

MS Answers has already a warning

The whole this has already been described within German Microsoft Answers-Forum from MVP Ingo Böttcher. But there is also an entry within the English Microsoft Answers forum referencing the German entry.

Currently, there is an increase in the number of malicious banner ads that open fraudulent web pages in the standard browser when starting or using apps on Windows 10. These websites either promise winnings in a competition or threaten to infect your PC with viruses. Both are nonsense.

It's not local malicious software on the PC! As a result, it is not necessary to install any tools to scan or to install the system at all. As long as you just close the window without confirming any questions to start scans or to pick up winnings, the thing is without consequence. The apps include advertising banners on external networks. Further details, to block such fraudulent ads may be found at Microsoft Answers forum.

This entry was posted in Security, Windows and tagged App, Windows 10. Bookmark the permalink.