[German]The developers of VideoLan released the VLC Player version 3.0.7.1 for Linux, macOS and Windows last night. It is a maintenance update which fixes the bug that during mpeg video playing a green flickering is displayed.

Last week version 3.0.7 of the VLC was released (see VLC Media Player 3.0.7 released). This version has closed a number of critical vulnerabilities in the software (see my linked article).

With the new version there are problems, if you watch a DVD you see green flickering. I haven’t found a solution except downgrade yet.

I also have the problem with the “green flickering” but with all MPEG files. So I downgraded to 3.0.6 right away.

Within VLC forum the issue has also been addressed. A downgrade is no option, due VLC 3.0.7 is a security update.

The cause are mostly settings

For lack of time I had not got involved in the discussion. But I know from experience that these effects like red lines or green flickering are caused by wrong settings or incorrect codec packs. For example, a long time ago I published a blog post about videos have a red vertical line in WMP 12. There it was the demo mode of the Catalyst graphics card driver that had to be turned off.

Since the graphics driver was not mentioned in the user feedback, I would have guessed a faulty codec pack. Since the VLC player comes with these codec packs, there is nothing you can do as a user(codec packs installed in Windows have no influence on the VLC). There would only have been the possibility to see if you could disable certain rendering options. In this context, the hardware acceleration of GPUs occurs to me as a frequent problem bear. Before I got around to researching anything, blog reader Homer had already posted the workaround: Disable hardware encoding via settings. That has been proposed within the VLC forum. German blog reader Oli confirmed, that this workaround helped.

When I just started the VLC Player 3.0.7 to view a video, I was greeted with an update notification. 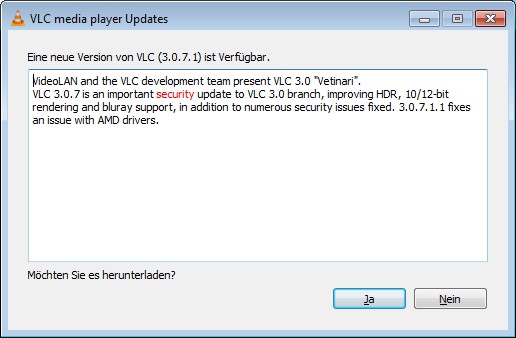 It was already stated there that issues with AMD drivers were fixed in this maintenance update. In the change log there are the following hints for corrections:

Alfred Neumann confirmed within this comment, hat the update to VLC Player 3.0.7.1 fixes the green flickering. So just update it or check the Videolan VLC website for a new download.

This entry was posted in Software, Update and tagged Update, VLC Player. Bookmark the permalink.