[German]It's an unpleasant surprise administrators of Windows 7 systems. July 9, 2019 patchday from Microsoft comes also with security-only Update KB4507456, but this package has telemetry on board.

German blog reader Bolko had already posted this comment on the blog a few hours ago (thanks for that).

The security-only KB4507456 contains telemetry (KB2952664, diagtrack, appraiser). Telemetry was previously only included in the rollups, but not in security-only. Secretly quiet and quietly Microsoft wants to extend the monitoring.

I only noticed that, but haven't time to dig in. Later, while visiting askwoody.com I came across the article Microsoft surreptitiously adds telemetry functionality to July 2019 Win7 Security-only patch linked by Bolko. Microsoft has added silently telemetry functionality to the July 2019 Security-only update for Windows 7 KB4507456. An anonymous poster had contacted askwoody.com with the following hint:

Warning for group B Windows 7 users!

It replaces infamous KB2952664 and contains telemetry. Some details can be found in  file information for update 4507456 (keywords: "telemetry", "diagtrack" and "appraiser") and under http://www.catalog.update.microsoft.com/ScopedViewInline.aspx?updateid=7cdee6a8-6f30-423e-b02c-3453e14e3a6e (in "Package details"->"This update replaces the following updates" and there is KB2952664 listed).

The poster had inspected the file list (link is available the KB article). There are entries for files with names like "telemetry", "diagtrack" and "appraiser". In 2016, I had already written something about the Diagnostics Tracking service (DiagTrack) in the article Plant Microsoft die Ausweitung der Telemetriedatenerfassung in Windows 7/8.1? At askwoody.com abbodi86 writes that DiagTrack is part of the Compatel Runner. And about appraiser I had written something documented in the article Windows 10 V1607: Update KB4033637 finally documented. 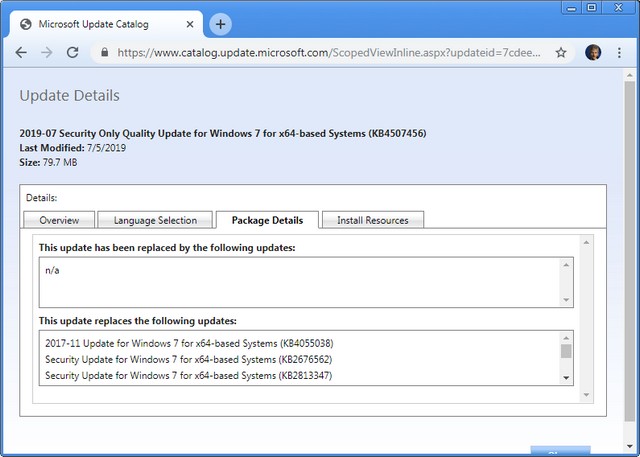 The anonymous poster at askwoody.com made another interesting statement. In the Microsoft Update Catalog for update KB4507456 you will find on the tab Package Details the information that the update KB4507456 replaces three other updates. Among others the update KB2952664 will be replaced, a compatibility update to keep Windows 7 up to date. The KB article says:

I have officially stopped updating my Win7 machine. I no longer trust Microsoft's updating process. I'll protect it from any existing and future vulnerabilities with my other defenses, as well as I can. Fuck you, @microsoft.https://t.co/x3CYassKMO

VessOnSecurity,  a security researcher has drawn consequences and announced them on Twitter (see above). He won't update his Windows 7 anymore, because he doesn't trust Microsoft anymore.