Windows Vista: No more unofficial updates due to SHA2

[German]A brief information for people who still use Windows Vista. Since July 2019 the unofficial approach to install Windows Server 2008 SP2 updates seems to simply doesn't work anymore. But there is a solution.

Windows Vista End of Support, but …

In April 2017 the extended support for Windows Vista expired – I had reported about it in the blog article Windows Vista reached End of Live (April 11, 2017). Microsoft no longer distributes security updates for this operating system.

Blog reader Gero H., who still runs a system with Windows Vista, had posted some lists of unofficial updates here in the blogs. Now Gero has informed me by mail about the following.

There was the possibility to download Server 2008 SP2 updates and install them under Vista. Unfortunately this doesn't work anymore after July 2019 Patchday.

It does not matter if the update script of os.ingenserverhost.de is used or not. Possibly it could be that after about 2 years Microsoft has now installed another algorithm that recognizes whether it is actually a Server 2008 SP2 system or a Vista.

I have changed the registry in the WindowsNT CurrentVersion key to a server 2008 SP2 datacenter. Furthermore the updates are not installed. 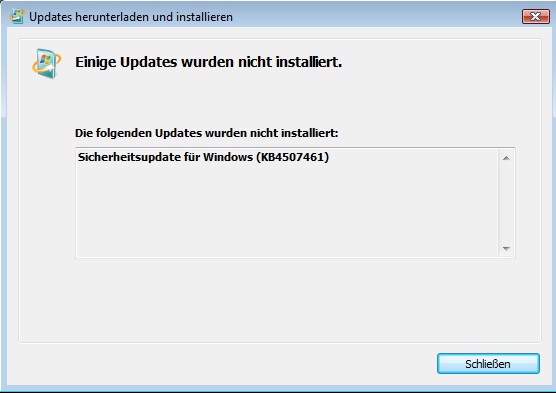 Much more likely it is that Windows Vista has not strapped the support for SHA2. So I downloaded the respective SHA2 support updates for Server 2008 SP2 and tried to install them. The update is rejected with the message "The update does not apply to your system".

Windows Vista is now completely unofficially out of support since June 2019. Only Internet Explorer 9 can still be updated (.NET Framework not tested).

Gero sent me some links to his server, where the old updates can still be downloaded. Since this is legally tricky and the support has now come to an end, I do without the links. Thanks to Gero for the hint.

But there is another solution

Gero H. contacted me a 2nd time and outlined a solution to the problem. I add this as a supplement.

I now have a solution to the problem that Windows Vista will no longer install updates from July 2019 due to the lack of SHA2 support.

If you search the net for updates for Server 2008 SP2 you can find this article at Microsoft. There you are referred to the KB4039648, which should guarantee the SHA2 support. Now this update cannot be installed.

However, there is another list which also addresses systems like Windows 7 or Server 2008 R2. There is a SSU update KB4493730 stated "that introduce SHA-2 code sign support for the servicing stack (SSU) was released as a security update." If you install this update, it is possible to install the July 2019 updates. No matter if Security Only or Rollups. That means the SHA2 support is given.

So it could happen, if a future update requires parts of the MSI SHA2 code, that it is still not installable, because the update KB4474419 is rejected.

So for now Windows Vista is upgradeable for SHA-2 support, wondering for how long?

3 Responses to Windows Vista: No more unofficial updates due to SHA2