[German]Microsoft has already released an update for the .NET Framework 3.5, 4.7.2, 4.8 for various Windows 10 versions on August 20, 2019. But the update comes with some issues. It bricks Veritas Backup Exec.

Already on August 13, 2019 there was an update, as mentioned in the German comments here (and this article). But Microsoft has probably added to the 20.8. The colleagues of Deskmodder took it up here and published the following list of cumulative updates for various Windows versions.

These updates can also be downloaded from Microsoft Update Catalog. Microsoft states that the update fixes a crash in the Bass Class Library (BCL) that occurs after event logs are broken down.

Two days ago blog reader Axel T. contacted me via e-mail and pointed out a big problem. He listed the details at administrator.de. Here is the translation of his German post:

I just installed the August updates on our Windows Server 2012 R2. Before that I checked all hints for possible issues with the new updates; like every month. Then I started our backup software BackupExec 15 on one of the servers because I planned to change a setting before the backup tonight.

And the software doesn't start anymore.

Error message "BackupExec does not work anymore". In addition some MS-Prosa, that was it. Restarting the server does not solve the problem either. Restart of the services also not.

The blog reader identified the .NET Framework update as the root cause. Then I got today another German Comment from blog reader Sebastian, reporting the same issue:

.net 4.8 bricks BE – the backup can't start anymore after installing the update.

Now I unistalles .net 4.8 and reinstalled 4.7.2.
It now runs again – if necessary all BE services have to be restarted 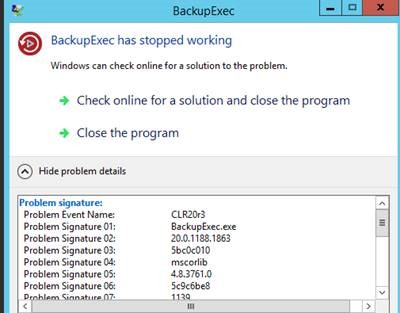 This issue is also observed on servers or workstations with the Backup Exec Remote Administration console installed.

The fix for this issue will be included in the next release (20.5) of Backup Exec. This article will be updated when 20.5 is available.

Maybe it will help those affected. Addendum: The crash might be fixed with update KB4511555 released on August 30, 2019.