[German]Users of Windows 10 version 1903 may run into problems after installing several August 2019 updates. Cortana causes a high CPU load on a core and the search does not work. And that doesn't necessarily depend on KB4512941 alone.

The post is the continuation of several blog posts I made about the KB4512941 update. 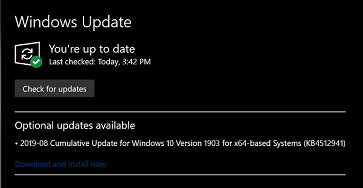 However, some users already reported problems with the first insider versions of update KB4512941:

The instructions in the .reg file should allow the Bing search, so the search in Windows shall work again and also the Cortana load shall go back again.

Note: If the .reg file doesn't help, fire up the registry editor and remove the value BingSearchEnabled from the registry. Then reboot. That should work.

Furthermore, blog reader Werner B. had contacted me directly by mail and told me about an observation. The high CPU load is generated by scripts in the Cortana cache folder, which in certain constellations run in 'loops'. I had prepared the details in the blog post Windows 10 V1903 Update KB4512941: Workaround for the Cortana high CPU load issue.

The exciting question was whether the above reported bugs with the broken search and the high CPU load by Cortana have now disappeared. I have received confirmations via Twitter, comments on the article Windows 10 V1903: Update KB4512941, KB4515530 (08/30/2019 and from the Internet that the bug has not been fixed and is still occurring. So you should try the workarounds described in the previous section.

Sometimes different information just falls into my picture like pieces of a puzzle. Two days ago German blog reader Andreas E. contacted me via Facebook in a private message:

I have another one: deactivated web search (GPO under Search) plus August update to 1903 causes broken search and high CPU load by Cortana. Had three cases so far, update uninstall helps, gpo not configured helps too.

I have to point out that Andreas E. uses Windows 10 as a consultant for enterprise customes – so there is usually no insider preview tested there. It is therefore a production system. Since the update KB4512941 was not yet released at this time, but only available to insiders in the release preview ring, this made me wonder.

The Microsoft KB article also doesn't mention any known issues. However, this update caused some installation errors for users (see links at the end of the article).

[See my addendum below]A few final remarks on the above sentence 'gpo not configured also helps' by blog reader Andreas E. He has found out the following: If certain group policies are configured on the affected machines, the search no longer works and Cortana causes a high CPU load. Can be controlled via gpedit.msc in case of emergency. The policies should be in the branch:

There is a policy Do not allow web search, which must not be set to not configured to avoid the issues mentioned above. 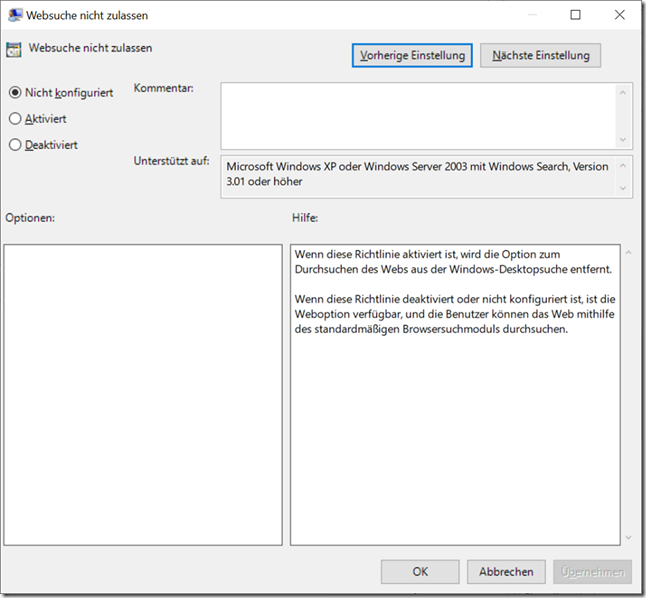 As soon as the web search (via Bing) is allowed, the search works and Cortana generates a normal CPU load. Something seems to have happened with the update KB4512508.

Addendum: This blog post is a 'work in progress'. Feedback from my German readers has shown that the GPO approach mentioned above probably no longer works with update KB4512941. During writing this blog post I already was aware of this German heise article but hadn't time to run a test. A few hours ago, the tippster Andreas E. has contacted me again by private message. His colleagues, who came across the issue, were probably wrong. The above GPO is no more functional – and the high CPU load really seems to be caused by update KB4512941. So the registry changes described above are the only fix.

Or use the Cortana cache backup approach mentioned in the blog post Windows 10 V1903 Update KB4512941: Workaround for the Cortana high CPU load issue. A reddit user left a comment within my blog, pointing to this thread, where he published a repair script to fix the error (it exchanges the Cortana cache folder). Hope that helps.

Addendum 2: I've written a brush up with findings reported from my blog readers at Windows 10 V1903: MS investigating the Search/Cortana issue (09/03/2019). There you will find also a confirmation, that Microsoft is investigating the issue and plan a fix in upcoming releases.