[German]Sophos, the owner of Sandboxie software, has just announced that the tool will be released for free. A license is no longer required – in version 5.31.4 all restrictions have been removed. The release as open source will follow. Here are some hints about this tool.

Sandboxie is an application isolation program that allows you to run other software under Windows in a controlled environment. Sandboxie takes control when installing the application and isolates all file and registry accesses and redirects them to separate files.

Sandboxie’s isolation technology separates the installed programs from the underlying operating system. This prevents unwanted changes from being made to personal data, programs, and applications that are safely stored on the hard drive. Sandboxie therefore enables you to test software and later uninstall it from the system without leaving any traces.

I myself used Sandboxie under Windows XP for application virtualization. You could test software and then uninstall it without leaving any traces, files or settings. However, at some point I ran into more and more into a situation where Sandboxie failed or the software could not be installed or used. A short time later the program became fee-based – and since I often ran into issues, I begun using virtual machines for my tests. With snapshots I could always reset the guest operating systems to their original state.

Since then, I haven’t been tracking what happened to Sandboxie, so I didn’t realize it was being bought by Sophos. The Sandboxie website now has the following information (thanks to Ralf for the hint): 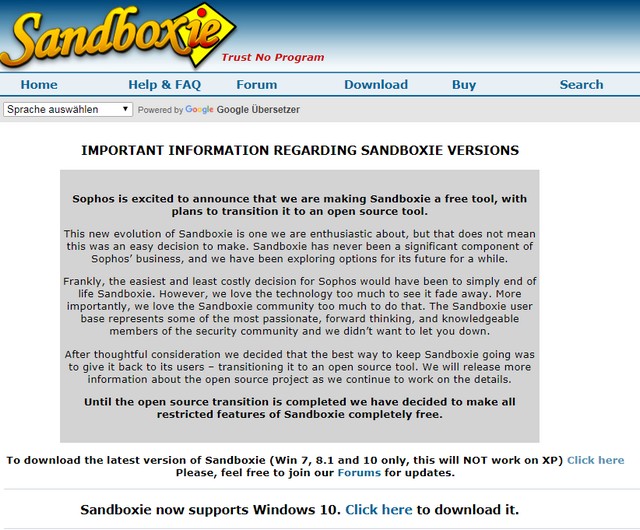 Sophos is releasing Sandbox as a free tool and plans to make it open source. Sophos mentions that the decision was made under cost considerations, as the tool has probably never been a significant part of Sophos’s business, but on the other hand they had to maintain the software. It is commendable that Sophos is not simply letting the tool die, but is planning to put its further devlopment in the hands of the user community. They can continue to maintain the open source tool.

Personally, I think that Microsoft’s decision to add the Windows Sandbox to Windows 10 Professional also played a role in Sophos’ decision. In any case, Sophos announces that they have remove all restrictions on the unlicensed version with the new release. If you still have a Sandboxie license, you still have to switch to the ‘free version’.

Sandboxie Version 5.31.4 has been available for download as a 32- or 64-bit version for Windows 7 to Windows 10 on this website since September 10, 2019. However, registration is required – due to US export regulations. This Community post contains some additional information.

This entry was posted in Software and tagged Software, Tip, Tool, Windows. Bookmark the permalink.