[German]Google's developers have rolled out some experimental feature to some of its chrome users. But this went wrong and making enterprise customers going nuts. Suddenly, users couldn't access websites anymore or the tabs were white due to browser crashes.

The unannounced experiment of the Chrome developers has failed terribly. So if you had any issues with Chrome the last few days, it wasn't up to you. I didn't get it myself because I use the Chrome clone Iron, where the experiment isn't rolled out.

An experiment and its consequences

In experiments, developers from Google, Mozilla and Microsoft like to test software on selected user groups before these changes are rolled out globally. However, such an experiment made by Google has gone quite downhill.

The experiment happened 2 days ago and came to my attention via Twitter (see above) as well as through this German user comment (thanks to Ralf). In the Google support forum there are hundreds of complaints to disturbances with the Chrome-Browser.

Environment:
* VM hosted on ESXi
* Windows Server 2012R2 (v6.3 build 9600) with patches current to Oct 2019
* Server is running remote desktop services
* Server is part of a Windows domain
* Domain is using Google provided group policy templates
* User count on the server is about 20
* Chrome version 78.0.3904.97 (stable)
* Antivirus in use: Trendmicro Serverprotect
Problem description:
Our users, at seemingly random intervals, experience their tabs going completely white and becoming non responsive. The portion of the tab that fails is only the rendering portion of the rendering pane. When the issue occurs, the display pane for the tab goes completely white. This is the case even if the site in the tab has been completely loaded. The browser its self does stay active. While all functions are operational above the display pane, the pane its self is completely unresponsive to input. As an example, with a tab experiencing the issue in focus, pressing F12 to access developer tools does nothing. With the same tab in focus, you can use the chrome browser menu to invoke the developer tools and they will be displayed as expected. Another example is right clicks or keyboard input into the failed pane is non responsive. Issuing input to the browser, such as reloading the pane or opening a new tab, gets the expected result. An immediate fix to the failed tabs can be to restart the browser, however, after a significant wait, they will regain functionality. Our timing puts the wait at somewhere around 15 minutes. Also, as a note, when using procmon to inspect the PIDs of the failed tabs, we can see the constant creation and termination of threads. Those threads however, seem to do nothing. 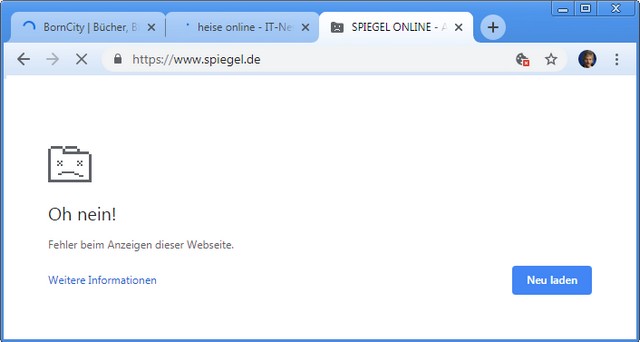 It has probably only hit special Chrome installations on servers – mostly in corporate environments (as it also sounds in the above forum post). There is usually no quick change to another browser possible. Catalin Cimpanu has gathered some voices of affected people on ZDNet. An administrator writes:

his has had a huge impact for all our Call Center agents and not being able to chat with our members. We spent the last day and a half trying to figure this out.

Our organization with multiple large retail brands had 1000 call center agents and many IT people affected for 2 days. This had a very large financial impact.

Like many others, this has had significant impact on our organization with our entire Operations (over 500 employees) working in a RDS environment with Google Chrome as the primary browser.

Also the Google Bug tracker, and on reddit.com (here and here) contains numerous entries from affected users. In the aftermath it appears simple – the cause was Google's experimental browser feature. But affected administrators couldn't make sense of it when users complained about browser malfunctions. An administrator suspected a malware infection in the corporate network because of the 'White Screen of Dead' and started a network-wide audit.

According to Google, everything was an experiment and the company has now rolled out a fix. The Chrome installations should work again. If the fix didn't reach all users, you can disable the experimental feature with the following two flags.

Further details can be taken from the linked articles? Was someone of you affected?

This entry was posted in browser, issue and tagged Chrome, issue. Bookmark the permalink.