I had already seen it on Askwoody a few days ago: The announcement that Microsoft plans to update its Windows 10 Update Assistant this week to support an upgrade to Windows 10 version 1909. As of November 18, 2019, KB3159635 has been updated to include the following information. 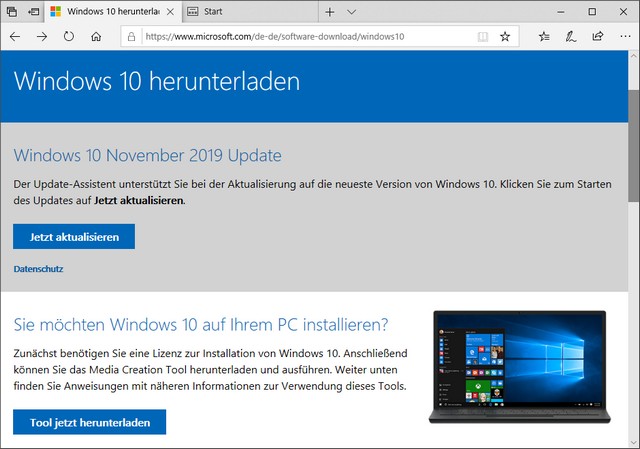 Note: The download for Update Assistant appears only if the Microsoft page is opened in a browser under Windows 10. In previous Windows versions only the Media Creation Tool is offered via the button Download Tool Now. The MCT allows you to download an installation image of Windows 10 and put it on DVD or USB stick.

The program must be launched from Windows 10; it helps users who do not want to wait until a feature update is offered via Windows Update. This is the case, for example, when Microsoft believes that compatibility problems exist on a machine.

Furthermore, Microsoft has officially started distributing the feature update via Windows Update for Business (WUB) and via WSUS since November 12, 2019. Blog reader Karl has notified me about a corresponding article via Twitter.

I already got some comments from German readers in my blog last week that Windows 10 V1909 had arrived as a feature update in WSUS. But I became aware of this Techcommunity article via the above tweet.  The article announced the availability of Windows 10, version 1909 via Windows Server Update Services (WSUS) and Windows Update for Business. It is also available for download through Visual Studio subscriptions, from the Software Download Center (via the Media Creation Tool), and from the Volume Licensing Service Center (VLSC).

This entry was posted in Update, Windows and tagged Upgrade, Windows 10 V1909, WSUS. Bookmark the permalink.