[German]Microsoft has announced Chromium Edge as available on January 15, 2020 for supported versions of Windows and macOS. The browser is available in more than 90 languages and also available for iOS and Android. Here are some additional information about the rollout and download, which I just received from Microsoft.

Microsoft just published this blog post with the announcement of the new Chromium-based Edge. Regular blog readers know that the new Microsoft Edge is based on the Chromium engine. The goal is to improve compatibility and facilitate cross-platform development of web applications.

It was a surprise for me: I assumed (after the various articles from Microsoft regarding update blocking and side-by-side mode) that the new Edge will be distributed today via Windows Update on all unmanaged machines. But this is not the case, Microsoft has chosen the following approach: 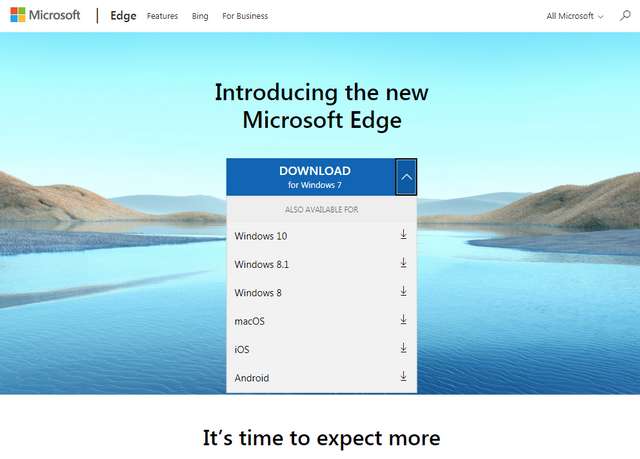 So there is the confirmation for the rollout in waves, which can take months. First, Windows Insiders in the Release Preview Ring will get their turn. Depending on what the telemetry reports back, other users will then be able to enjoy the new browser via Windows Update.

Since it has already been asked at heise: When switching to the new version, favorites, passwords, stored information for forms and basic settings are transferred without customers having to do anything.

For enterprise customers (with Windows 10 Enterprise and Education), Microsoft Edge is not automatically deployed; IT administrators must download an offline deployment package. Full details on the rollout process are available here.

Enterprise customers can learn more about deploying, managing, and configuring Microsoft Edge on this new Web site and in this enterprise documentation. Currently, the Chromium Build Stable 79.0.309.65 is available for download.

The new Web site also provides the Group Policy for managing the Chromium Edge as a .cab file. Hints for use (e.g. for side-by-side operation) can be found in the blog post Run old and new Edge in Side-by modus.

What is new in Chromium Edge?

Microsoft says, Edge comes with optimized performance, gets a (see logo at the beginning of this article and this Microsoft blog post). The browser comes with a number of new features for both consumer and enterprise customers. These include enhanced privacy features and features for productive and personalized use. Below are a few highlights in the overview.

Features for IT professionals

IT professionals will benefit in the future, Microsoft promises, with further innovations for a simplified and secure rollout:

FastTrack is designed to make it easier for customers to deploy Microsoft cloud solutions. Customers with eligible subscriptions to Microsoft 365, Azure or Dynamics 365 can use FastTrack at no additional cost during the term of their subscription.

More details about the new generation of Microsoft Edge can be found in the Windows Blog and here. For corporate IT there is this website, where a download is also possible. Information about the future of the browser will be continuously available on the Microsoft Edge Insider website. Developers can learn more at blogs.windows.com/msedgedev and in the web developer documentation.

Windows 7 support until at least mid 2021

The days I had reported that Google wants to make its Chrome browser available until at least July 2021 for Windows 7, which was dropped from support on 14.1.2020 (see Chrome support for Windows 7 until at least mid 2021). In July 2021 Google will then decide whether there are enough users, so that the support can be extended further on.

The last days there are also reports, that Microsoft has confirmed to neowin.net that they will continue to support the Chromium Edge under Windows 7 SP1 until July 2021. For companies that continue to run Windows 7 within the Extended Security Update Program, this is certainly an interesting information.

However, according to my current state of knowledge, there is some uncertainty about the point that there is a decision that Chromium-Edge will only be supported on Windows 7 until July 2021 (see this comment). If things don’t go badly, the Chromium Edge could probably be supported until January 2023 on Windows 7. Then Windows 7 SP1 will be dropped from ESU support as well.

Addendum: First users have already reported installation issues. Edge will install in the wrong language (see the whole thread here). The language is chosen randomly, the Content Delivery Network (CDN) is assumed to be the cause. But it’s possible to change the language via Edge settings (Options -> Language).

We’ve seen some reports about the browser being installed in a language other than the expected language. Our team is aware and working diligently to resolve. Please keep an eye out here for any updates!

The above tweet is from the Edge development team, and confirms the observation. The team is investigating the bug.

This entry was posted in browser, Software, Update and tagged Edge, Update. Bookmark the permalink.