[German]Microsoft has just revised its driver update process. Hardware partners can now distribute drivers to Windows machines via Windows Update. In addition, a new settings page for Windows 10 will be added, where optional driver updates can be selected by the user. Addenum: Only for Windows 10 Version 2004 upward.

I didn't discuss it further here in the blog: But Microsoft experimented with Windows 10 insiders in late 2019. Occasionally, there was a new options page under the Windows Update settings, where optional drivers could be selected for installation. But the option disappeared again.

And in January 2020 I've published the blog post Windows 10: Microsoft allows feature and driver update blocks. There I explained some new features for hardware manufacturers. OEM partners have the possibility to block the distribution of feature updates if incompatibilities with drivers are known. Furthermore Microsoft has announced blocking intervals for the distribution of drivers from the manufacturers around the patchday or an OS rollout. This is to avoid collisions of driver updates with Windows updates or function updates.

Delivering drivers and updating them can be a complicated story. In addition, there are several ways to roll out or update drivers for Windows (through driver updaters, via Windows Update, or manually by the user). Therefore, Microsoft has established a new mechanism for the distribution of drivers by hardware partners and announced its availability in this Techcommunity article.

In the future, partners will be able to roll out drivers to specific machines in waves. This mechanism is currently known from function updates, which are also rolled out in waves by Microsoft. In the case of drivers, this step-by-step rollout should enable partners to detect problems earlier and take corrective action if necessary.

When submitting the drivers, partners can specify whether this should be distributed and installed automatically or manually. If the 'Automatic' publishing option is specified by the partner, the driver is distributed as a Critical Update (CU) via Windows Update. At the same time, Microsoft also offers the driver as a dynamic update (DU). These updates can be requested during setup or when resetting Windows 10. 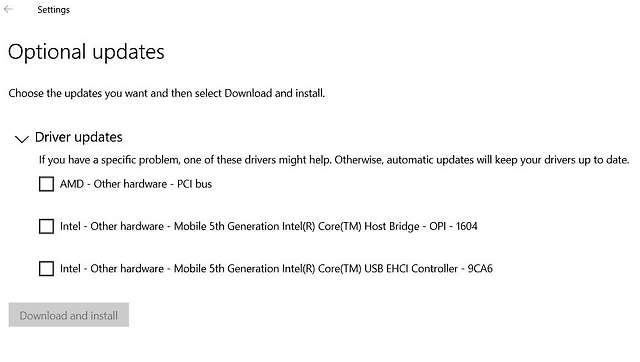 In a manual delivery, the user can select the drivers for installation. To do this, there will be a page for optional driver updates in the settings under Windows Update (see figure). Checkboxes allow the user to select which drivers to download and install when the button is selected.

Addendum: I asked Microsoft in a comment in Techcommunity article, for which Windows 10 version this feature will be available.

Are the changes in Windows 10 UX for Windows 10 2004 – or will be see a backport to supported older Windows 10 builds via WU?

Microsoft employee kevintremblay has meanwhile answered directly and clarified that this option only comes for Windows 10 version 2004 and higher.

The changes to Ux for Windows 10 20H1 detailed here will not be backported to previous releases. For older versions of Windows Manual drivers are obtained via Device Manager (same as Optional drivers were).