[German]Microsoft is introducing some changes in 2020 regarding Windows 10 drivers. Manufacturers will be able to request a feature update blocking for incompatible drivers. And around the patchday and during the rollout of feature updates, driver updates via Windows Update will be suspended.

Windows 10 and its driver issues

In the past, Windows 10 has often been plagued by problems with function updates because drivers from various vendors did not work with the new build of the operating system. Here in the blog I have had more frequent posts about this. Furthermore, the entries of the 'Show-Stopper for Windows 10 Functional Updates' are legendary due to driver problems on the Windows 10 status page.

In addition, there is always the annoyance that Windows updates and driver updates are delivered on patchday and then conflicting. It's often unclear if it is due to driver or security updates. Therefore, Microsoft is introducing changes in 2020 to avoid these problems in advance.

Martin Geuß (Dr. Windows) and Bleeping Computer report on a document that was distributed to Microsoft partners. The document was originally marked as confidential (for Hardware Dev Center users), but was probably distributed more widely after an update (and is available on the net, according to ZDnet it was also available at Microsoft).

In the document, Microsoft informs its partners about some changes in 2020. Here is the text excerpt of the relevant passage from the six-page document:

In order to ensure that end users have a good post-update experience, when a driver has a known incompatibility with a feature update, Partners can request a temporary WU offer block (~30-60 days) so that Windows Update will not offer the feature update to devices running a driver version with a known incompatibility. The offer block will be removed once a partner has posted an updated driver (as Automatic and/or Dynamic) via Hardware Dev Center portal.

The following screenshot shows a larger part of the relevant page from this document. 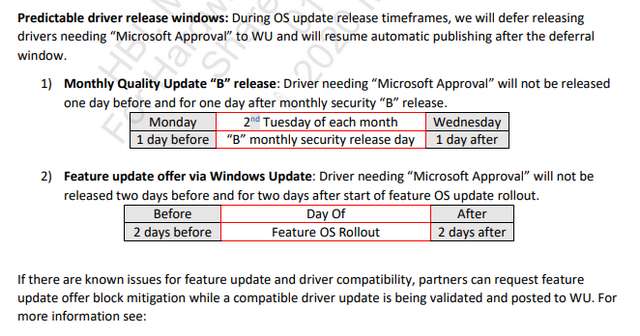 Microsoft determines when drivers submitted by partners that require approval for release through Windows Update may be submitted, or when distribution is suspended. At

no driver updates are delivered via Windows Updates. This is to prevent driver updates from colliding with security updates and function updates and causing problems. In addition, this timing equalization should also make it easier to diagnose problems that approach incompatible drivers – after all, the user doesn't get a buzz from security and driver updates.