[German]Microsoft released the cumulative update KB4535996 for Windows 10 version 1903 and 1909 on February 27, 2020. But some users are facing serious issues with this optional update.

I introduced update KB4535996 in the blog post Windows 10 Version 190x: Update KB4535996 (Feb. 27, 2020). This update fixes a whole range of problems. This solves the bug with missing printers. Also the broken search in the taskbar should be fixed. But the problem with the temporary user profiles is not fixed (see following text). 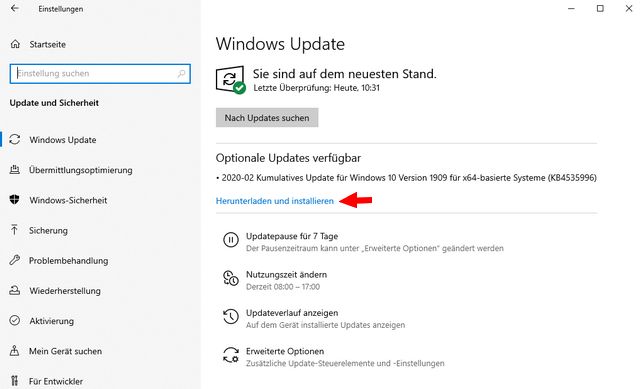 But it is an optional update, the download of which must be explicitly initiated by the user. So if you don't suffer from a bug that is indicated as fixed, you should wait with the update installation.

It appears that by installing update KB4535996, certain users are running into the temporary user profile problem. I described the bug in the blog post Windows 10: Update KB4532693 kills user data/profile for the previous update.

Last weekend EP left a comment (thanks), which referred to this Dutch forum. There are discussions about issues with the temporary profile caused by update KB4535996. Woody Leonhard started this thread on this topic.

Within my German blog post Windows 10 Version 190x: Update KB4535996 (published yesterday) I got then another comment confirming the temporary profile issue. At German site Dr. Windows is an article about this update, where I read another user comment with the same issue:

Anyone else who has run into this problem with temporary user profiles?

German blog reader Steffen refers in this comment to this article comment on hothardware.com. A user describes the following effect:

After I installed this update, I noticed that the "System" process was hammering my SSD with disk writes. The disk usage was 100%, at a rate of writing 1.5 GB/s. I left it for a few hours thinking it would stop. 6 terabytes written later (!!!), and I uninstalled the update. The writes to disk immediately stopped. Beware of this update!

But I haven't seen more posts with this error description.

In Tens forum I found this comment from a user who made a strange observation:

Since updating my machines they now all show "Windows Update Attention Needed" on the settings front page. But checking for updates they're up to date and there are no notifications or messages to say what the problem is.
Anyone else seen this?

He constantly gets the hint that a Windows Update needs attention, but there is no information where it is stuck. We have had this behavior

In the Tensforum there is this comment of the user canibal, who criticizes a degraded audio quality.

Within my German blog I got this comment, where a user reported, that the sound output has stalled after installing the update.

At reddit.com there is this thread, where also framedrops in graphics output are claimed.

Addendum: In Windows there is a programm called SignTool.exe, that may be used to sign anc check files. According to this Technet forum post and this report, more and more administrators are claiming that the tool crashes after installing the optional update.

Just a suspicion: Installed third-party virus scanners could be the cause of such error messages.

Here (and here) are posts in German Microsoft Answers forums reporting install errror 0x800f0988. Error code 0x800f0988 notifies about error within the registry and/or in files located in WinSxS folder and stands for:

In a German comment here by Ulf here in the blog, the installation error 0x800f0900 is complained about. For both error codes I did not find any further explanations in my sources. Inspecting the CBS.log file could help to find out the root issues for this error. German blog reader Karl Heinz mentioned here a BSOD after 20 minutes. And within this MS Answers forum thread users complain about freezing or boot issues on their systems or flickering screen after login. There are also problem reports on Windows Report, but they are still related to the preview.

Usually only a) not installing the optional Windows 10 Update KB4535996 can help here, because this must be explicitly initiated for download. And b) if it was installed, the update has to be uninstalled. To do this, go to the settings page and click on 'Update and Security'- Windows Update'. There is a hyperlink to display the update history and on this page you will find a command to uninstall a selected update.