[German]Finally, Microsoft tries to fix an annoying bug in the iOS Outlook app, which in connection with Exchange servers displayed birthdays one day too early. The bug has been there for nearly than a decade.

The Outlook birthday bug under iOS

Users using an iPhone or iPad with iOS can install the Microsoft Outlook app there. The app also supports the synchronization of calendar data with Exchange servers. Actually a fine thing, in my opinion.

But administrators have probably had some grey hair, because the birthdays have been postponed by one day. Most of the time the birthday appeared one day too early. In 2018 I had the post Outlook app shows birthdays one day too early on this topic. In the blog post you can find the following screenshot with some information. Apparently there is a synchronization problem with Outlook on the iPhone. 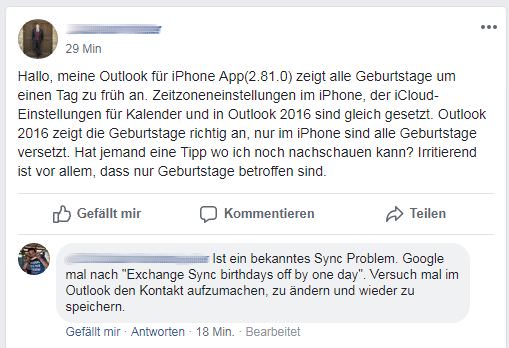 The birthdays are displayed too early. The usual settings like time zone or Apple’s iCloud preferences had already been checked. During the web search for the terms “Exchange Sync birthdays off by one day” I got exactly one hit in the Lenovo forum. In 2011, users there discussed the problem with Exchange. The solution was to open, change and save contact entries in Outlook.

This old Microsoft Answers forum thread from 2011 indicates that it is a known bug based on an old date field in the Hotmail database. The solution is an update of the contact in question. The same can be found in this entry in the Apple support forum from 2016. Here are several fixes proposed, from resetting the iOS device to adjusting the timezone settings. But changing the contact information and saving it has helped here as well.

Outlook User Voice will tell you even more. Since 2015, it has received over 260 votes. The problem probably only affects users who use Exchange ActiveSync outside the US time zone settings.

In the KB article, Microsoft then suggests a very simple fix for Exchange Server 2016/2019:

It’s technically not possible to do changes for already created birthdays after you apply this update.

However, according to Microsoft, there are two workarounds available for the birthdays that are still incorrect:

But these are workarounds that people have used before to fix the problem. Final question: Was anyone affected and do the cumulative updates mentioned above help?