[German]As expected, Microsoft has released both Windows 10 version 2004 and Windows Server 2004 for general use in the late evening of 27 May 2020.

The announcement by Microsoft

or example, the general availability information can be found on the status page for Windows 10, version 2004 and Windows Server, version 2004. 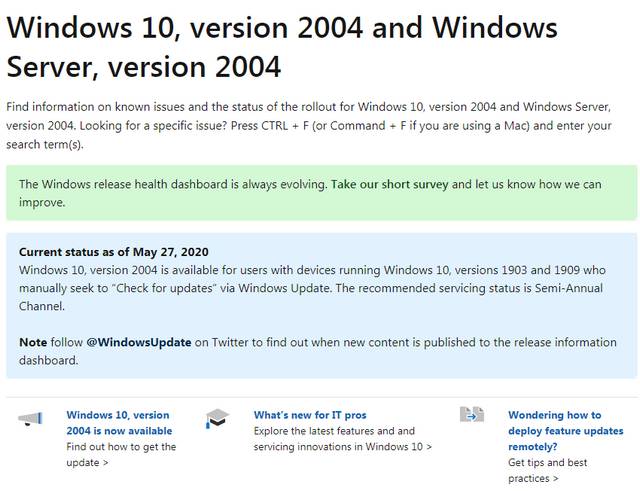 In this article, Microsoft then confirms that no automatic update is performed despite general availability. Initially, the upgrade will only be offered on systems running Windows 10 version 1903 and version 1909. And even there, users will have to go to Windows Update in the settings page under Update and Security and then click the Check for Update button. Then the update client will start searching for the feature update.

Then an entry Feature update for Windows 10 Version 2004 should be shown under Optional Updates available. The user can then click a hyperlink to download and install the feature update.

But note the German comment from Martin – who says, that his test with Windows 1903/1909 resulted, that Windows 10 install a feature update immediately, if Feature Updates are deferred a few days and this period is reached.

Are you not offered a function update? As long as no update delay is set, this is intended by Microsoft. Microsoft writes here, that the distribution of the new Windows version will only be done on selected systems, even if a search is done. For example, I am not offered anything yet. But Microsoft wants to extend the distribution step by step to more systems in the coming weeks. And if you are in a hurry, you can use the download tool (see Windows 10 Version 2004 will be released on May 27, 2020).

A list of what's new can be found in the Windows Blog for Consumer. For IT users Microsoft has created this page. Not mentioned there are the support for Wi-Fi 6 and WPA3 (see).

Just wait, there are too many bugs

This entry was posted in Windows and tagged Windows 10 Version 2004. Bookmark the permalink.