Ninjutsu OS: Banned by a DMCA Appeal on behalf of Microsoft

[German]Ninjutsu OS was a project of the security expert Hasan A. to increase the security and privacy of  Windows 10 systems by scripts and tools. The project was banned from the public Internet by Microsoft through a DMCA complaint (Digital Millennium Copyright Act).

The information has been already present within my German blog since June 15th, 2020, because a blog reader mentioned the topic. He had posted a link to a German site, covering the story, but the original article may be found at torrentfreak. Here is the short version, what it is all about and what happened.

What is Ninjutsu OS?

Ninjutsu OS was a project of the security expert Hasan A., which is currently not publicly continued as a Ninjutsu project, if I interpret the following tweet correctly.

The project had the goal to modify a Microsoft Windows 10 install using scripts and tools in a way, that security experts could work with it. Through modifications security and privacy of the system should be increased. And there was approaches to can optimize or remove features. Security expert Hasan A. provided two tools for this purpose: Win10-Initial-Setup-Script (I just presented something similar here, but that’s a challenging aproach for experts) and O & O ShutUp10 (the AntiSpy-Tool). Both tools are still available via Github and the O&O page.

The project Ninjutsu OS started on May 7th [2020] to shift Windows 10 modding to a completely new level and turn Windows 10 into a powerful platform for penetration testing. Numerous tools (about 800), including hardware monitoring, VPN manager, Google Chrome and a torrent client, were added for security experts as well as for regular users. It was also designed to remove features that are considered undesirable or unnecessary in such an environment.

What happened to Ninjutsu OS?

I don’t know exactly what happened and what exactly Microsoft was doing. Fact is: The project was available for download on Github from June 6th, 2020 and there were also copies of the ISO file on other sites. Then the Business Software Alliance (BSA) filed a complaint based on the Digital Millennium Copyright Act (DCMA), on behalf of Microsoft, to Github and the other sites. It says Ninjutsu OS violates Microsoft’s copyrights and need to be removed.

BSA has determined that GitHub.com (specifically, content made available on GitHub through the link listed below) is providing access to copyrighted, nonpublic, proprietary information of our member Microsoft. The link leads to copyrighted material pertaining to Microsoft. Specifically, the copyrighted material in question can be found at the following link: *ttps://github.com/ninjutsu-project/ninjutsu-project.github.io.

A DCMA complaint always includes a request to the operator of the site to remove the material complained of for copyright infringement. This request has also been complied with by the sites concerned. The github page now shows the following: 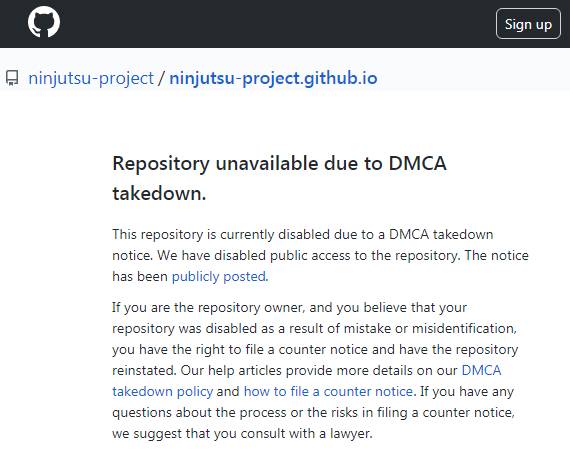 So the material was removed. The same applies to the other pages where the project was located. But since the original tools were still available on the internet, it is unclear to me what exactly was complained by the BSA. Torrentfreak writes that in the DMCA complaint the following was listed as a violation of Microsoft’s rights

Would be the hammer, of course, if that were the case. But I’m not sure what exactly was hosted on Github – the statement ‘I downloaded the thick ISO once. Ninjutsu will be tested on occasion’ of a blog reader suggests to me that there were parts or the whole installation image of Windows 10 – which would have justified the DMCA complaint. The security expert Hasan A. rejects the accusations that the project does not violate any rights of Microsoft. Currently, the project is only being continued privately, as can be seen on the Twitter channel.