[German]It seems, that Microsoft has changed something in Windows Update on Windows 10 clients in the last few months. Many supposedly optional preview updates are now installed by default without the user being able to refuse. Here is a brief overview, what users has reported and what I recognized.

The update control by the user is (at least for consumers) terrible in Windows 10. There is the possibility to defer updates by 7 days intervals with a possibility to repeat this period up to 35 days. And optional updates should actually be selectable for download and installation by the user via a link. But that doesn't always seem to work, as I hinted in the article Windows 10 Version 2004: Forced upgrade without user consent in early June 2020. There was a long discussion about this topic.

Last weekend I received an email from blog reader James L., who reported an observation that he described as:

You like to report on update topics in your blog. Maybe the following topic has already been touched on.
Keyword: update behavior.

I – rather less IT-affine – have the habit of postponing the patchday by 1.5 weeks. Accordingly I set in the update options (Windows 10 Home 1909) a date and usually trigger the update run manually a few days before (button "Search for Updates").

Since two patchdays the framework preview update is installed when I start the update process (KB4570723). I did not find an Option to uncheck this update, it is not presented as optional. The phenomenon already occurred to me at last patchday.

Maybe you have some ideas in your blog how to stop such processes – especially preview updates – under Windows 10?

The whole thing fitted perfectly to my own experiences, which I have documented below.

My own experience documented in the screenshot

A few days ago I started my Windows 10 test machine again and had pending updates installed. This is a machine running Windows 10 version 1909. After installing the August 2020 security updates, the Windows Updates dialog box shows me the following page (it's already in German). 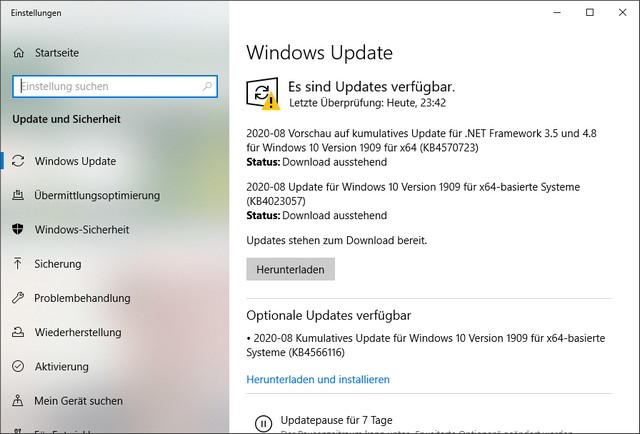 There the dilemma becomes immediately clear. The optional cumulative update KB4566116 must be explicitly triggered via a link to download and install (that's, what I'm expected). But in the above dialog box there are also two updates where the user can only click the download (Herunterladen) button to trigger the download and installation. However, one entry is a preview update for .NET Framework 3.5 and 4.8, so if the user wants to install the updates, he has no choice but to have the other offered updates installed as well.

The above description of the blog reader indicates that this behavior has been observed only recently. So it is possible that this is a bug, and the behavior is not intended by Microsoft.

The observation of blog reader Karl, who suspects that updates for Windows Defender are blocked if updates in Windows 10 are suspended via Windows Update, also fits the picture. The whole thing has been discussed at askwoody.com but has not yet been fully debated.

And I saw the following tweet indicating another issue with Windows Update and toast notification.

@sudhagart – is this expected? The toast notification prompting to restart before the LCU is finished installing? #Win10 #2004 pic.twitter.com/tncL4caAjA

Through Facebook, I have received the following text from someone who is very close to Microsoft in consulting:

They told me that something must have gone wrong with the reactivation of the C- and D-Week updates (they were suspended due to Corona) and that it was not intentional. Next month it would be normal again…

But that doesn't explain the observation of the blog reader quoted above that the behavior has been occurring for two patchdays. We will have to wait and see what happens.