[German]The time has come, Microsoft has integrated a notifcation bar, that indicates the end of Flash support, when using Internet Explorer in Windows 10 during visiting Flash pages.

Flash support will end in 2020

Flash in Microsoft browsers in Windows

Support until the end

In summer 2021, all APIs, Group Policy, and user interfaces that specifically govern the behavior of Adobe Flash Player will be removed from Microsoft Edge (legacy) and Internet Explorer 11. This will be done via the latest “Cumulative Update” on Windows 10 platforms and via “Cumulative Update for Internet Explorer 11” or “Monthly Rollup” on Windows 8.1, Windows Server 2012 and Windows Embedded 8 Standard. The “Update to remove Adobe Flash Player” will also be included as part of the “Cumulative Update” and “Monthly Rollup” from this point on. I had discussed this in the blog post Microsoft: Flash Player will be removable in autumn, support will end in 2021.

Notifcation bar about End of Flash in Internet Explorer

Adds a notification to Internet Explorer 11 that informs users about the end of support for Adobe Flash in December 2020. For more information, see KB4581051.

As soon as one of these updates is installed on the mentioned Windows 10 versions, Internet Explorer 11 can display a notification about the expiration of Flash support. This notification bar informs users visiting websites with Flash content that support for Adobe Flash Player will end on December 31, 2020, as shown in the screenshot below (I no longer have a Windows 10 version 1809 or 190x machine to test, the screen shot is from the colleagues of Bleeping Computer). 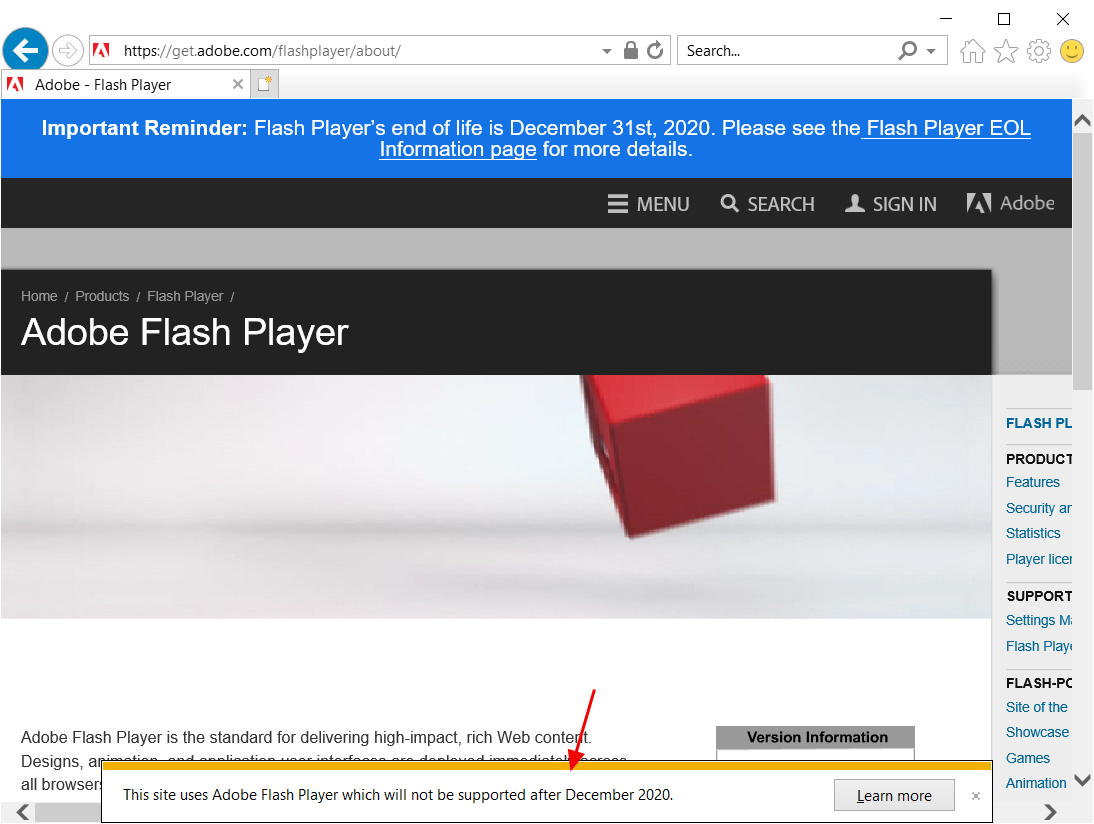 Enterprise customers who want to disable this notification bar in Internet Explorer 11 can do so by opening the following registry key:

There the 32-bit DWORD value DisableFlashNotificationPolicy must be set to 1.

This entry was posted in browser, Windows and tagged Flash, Internet Explorer. Bookmark the permalink.