Windows 10: Has Telnet been removed as a feature?

[German]Strange observation of a blog-reader, which I will discuss here. It’s about the telnet function, which can be installed as an optional feature. The program was suddenly gone and could only be found as a copy in a cache. Here are some details about what it is all about.

Telnet client as a Windows feature

Telnet (Teletype Network)is the name of a network protocol widely used on the Internet. Under Windows, the Telnet client can be used at the command prompt, but must be installed as an optional feature. 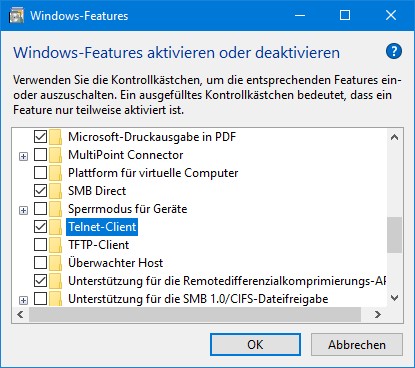 Afterwards, the Telnet client can be called with telnet at the command prompt and used for testing. Works here under Windows 10 Version 2004 without any problems, as I was able to verify during a test.

Let us now come to a curiosity. Blog reader A.K. contacted me by email a few hours ago and asked me about a strange observation. He has been working as an administrator for several years now and uses Windows 10 (each version 2004). Now he wrote:

To test the connection in case of problems, I like to use telnet “for call waiting” (telnet destination-address destination-port). Analogue smtp via telnet is still a very simple way to narrow down problems.

Today I noticed something strange: Although the telnet-client is installed on both business and private computers, I could not use it on both systems (“telnet not found”). A search found it on both systems only in the depths of the file system in a cache folder. But from there you can use telnet (but should you?).

When I asked if he had installed telnet as a feature and if anything had been changed or updated, I got the following feedback.

I had installed telnet via Windows features (it is almost always the first thing after alternative browsers and Total Commander). Both systems were brought to v2004 via feature upgrades (the private one is professional, the professional education). Windows thinks it is up to date on both systems.

And if the firewall admin has enabled access? telnet destination port, then you know and may have to check the application.

Mail does not work? telnet mailserver 25 (or alternatively), helo mail, … then you know.

If two independent computers are affected, this should make you wonder. The blog reader then asked Google, but found nothing. So he asked me by mail if I knew anything. Possibly it is an inexplicable individual case. Hence the question to you: Has anyone noticed that an installed Telnet client under Windows 10 suddenly disappeared?

1 Response to Windows 10: Has Telnet been removed as a feature?