[German]At the beginning of November 2020, I would like to take a look at the current figures for desktop operating system distribution as of the end of October 2020. In addition, there is a look at the browser shares on the desktop. In October 2020 I had omitted this overview – so I was curious to see what the figures would look like. By the way, this is the last time in this form, since NetMarketShare will cease to operate in its current form.

Windows on the desktop

Looking at the latest figures from netmarketshare.com (to the end of October 2020), Windows still runs on 88.32% of desktop systems. Mac OS comes to 9.72 %, while Linux falls to 1.4 %. So no real change in market share, Windows continues to dominate the desktop, although there have been some slight fluctuations in recent months. 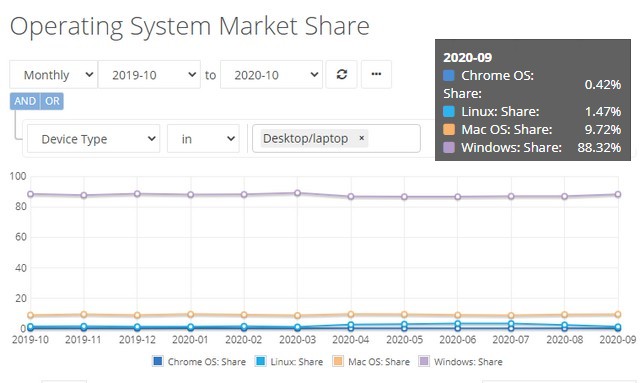 In the analysis of the distribution by operating system version, the NetMarketShare for Desktop Operating Systems web page shows the following distribution:

So Windows 10 has gained a little ground compared to the end of August, the end of support for Windows 7 in January 2020 shows little effect. Windows 7 has even made a slight gain and continues to run on well over one in five desktop systems. 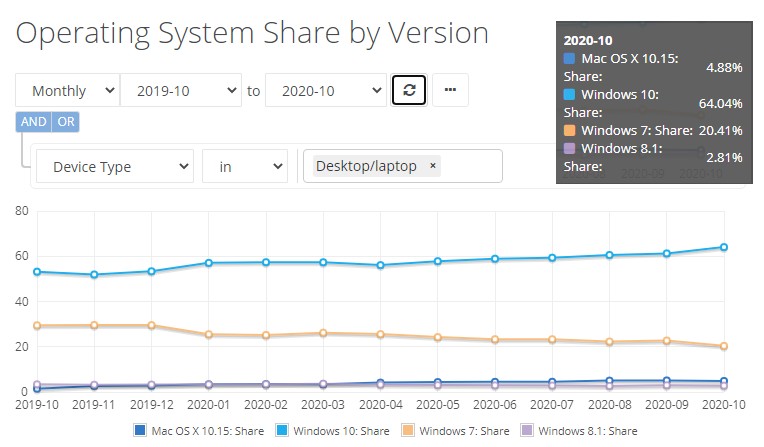 With macOS there was waste compared to August 2020 and Linux does not actually appear in the above graphic. Which one can state however also: The change from Windows 7 to Windows 10 did not really take place in October 2020 either. People stick to the currently used operating systems. The distribution of Windows 10 on the systems is not shown in the above list – and I don't comment on AdDuplex numbers here in the blog (too uncertain).

Also for the past month I would like to take a look at the browser distribution on the desktop, because in January 2020 the Chromium Edge was released as an innovation. Among the browsers on desktop systems, Google Chrome is the undisputed leader with 69.25% (8.2020 79.89%), followed by the Edge, which rises to second place with 10.22% (8.2020 8.52%). The share of the Chromium Edge is increasing – because Microsoft is using tricks to push the browser onto the systems and support for the Legacy Edge will end in early 2021. Firefox has to be satisfied with 7.22 % (8.2020 7.11 %), but is losing market share. The Internet Explorer is at 5.38%, so it dies so slowly.