[German]The US toy manufacturer, Mattel, has filed information about a successful ransomware attack on its corporate IT. This has been revealed in a report send to the US Securities Exchange Commission.

Mattel is the second largest toy manufacturer in the world with 24,000 employees and a turnover of 5.7 billion dollars for 2019. Mattel owns the well-known toy brands Barbie, American Girl or Thomas & Friends. I became aware of this fact through the following tweet. Both Bleeping Computer and ZDNet reported also on this incident. 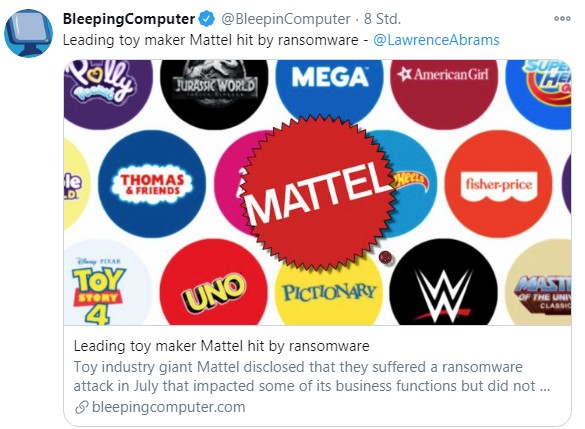 On July 28, 2020, Mattel discovered that it was the victim of a ransomware attack on its information technology systems that caused data on a number of systems to be encrypted. Promptly upon detection of the attack, Mattel began enacting its response protocols and taking a series of measures to stop the attack and restore impacted systems. Mattel believes it has contained the attack and, although some business functions were temporarily impacted, Mattel was able to restore its critical operations.

Since the attack has been a while ago, the chance of data being taken off and published for blackmailing purposes is probably small (I didn't notice anything in this regard). The company says that a subsequent forensic investigation revealed that the cyber criminals behind the attack did not steal any sensitive business data or retail customer, supplier, consumer or employee data.

Overall, the company appears to have been lucky in its misfortune. Mattel states that the ransomware attack "had no material impact on the company's business operations or financial condition. Typically, the damage caused by ransomware attacks is in the mid double-digit millions for companies of this size.

Mattel probably didn't reveal or I don't know anything about the attack vector or details of the IT infrastructure – and I couldn't find anything in a quick search.