[German]There was a cyber attack on the Japanese game developer Capcom, which develops games like Resident Evil, etc. The company reported this and indicated that business operations were affected last weekend.

Capcom  is a Japanese video game developer and publisher based in Osaka. It has offices in Sunnyvale, London, Hong Kong and Hamburg. The abbreviation stands for Capsule Computers. Players know Capcom from Street Fighter, Resident Evil, Devil May Cry, Monster Hunter, Mega Man etc. The following tweet from Bleeping Computer made me aware of the cyber attack. 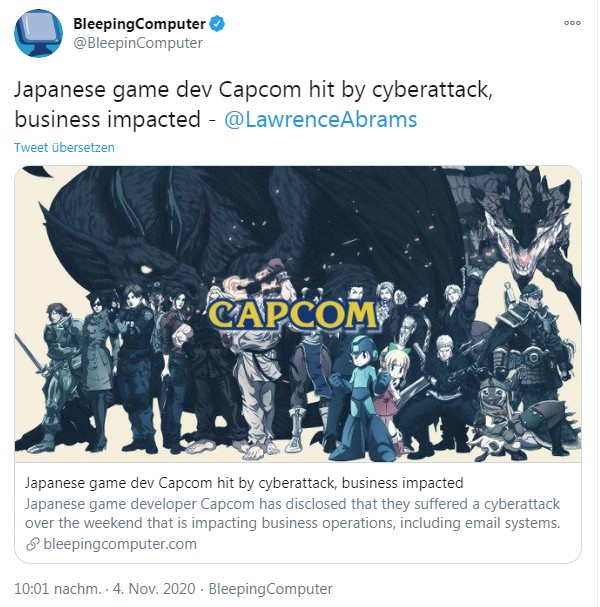 In a press release issued by the Company on November 4, 2020, it is stated that Capcom suffered a cyber attack on the morning of November 2, 2020. Here is the text:

Beginning in the early morning hours of November 2, 2020 some of the Capcom Group networks experienced issues that affected access to certain systems, including email and file servers. The company has confirmed that this was due to unauthorized access carried out by a third party, and that it has halted some operations of its internal networks as of November 2. Capcom expressed its deepest regret for any inconvenience this may cause to its various stakeholders. Further, it stated that at present there is no indication that any customer information was breached. This incident has not affected connections for playing the company's games online or access to its various websites.

Presently, Capcom is consulting with the police as well as other related authorities while both carrying out an investigation and taking measures to restore its systems. The company will continue to offer relevant updates as the facts become clear, via its websites and other means.

In the meantime, there were repeated notes on the company's websites that certain services such as e-mail communication were impaired. However, I currently have no information as to whether this was a ransomware attack and how the cyber criminals proceeded. Bleeping Computer writes here that sources reported an infection with Trickbot at Capcom in August 2020. Usually this ends with a ransomware attack with Ryuk or Conti.