[German]The day before yesterday I had reported about a strange event. A balance of nearly $1 billion was withdrawn from a Bitcoin account. What looked like a hack now turned out to be a seizure action by the US government.

There was a password-protected BitCoin wallet with almost $1 billion in Bitcoins as crypto-money balances. On November 3, 2020, the wallet or account still had a balance of 69369,16628020 BitCoins. According to the current exchange rate, this corresponds to approximately 957 million dollars. Overnight the balance dropped to a meager $1.38 equivalent, someone had the Bitcoins transferred.

This wallet has been passed among hackers since 2015 and when the incident was first reported by Alon Gal, co-founder and CTO of Hudson Rock, speculation started. It was speculated that hackers may have cracked this wallet. One option, of course, was for the owner of the wallet to transfer the funds to other accounts. I covered within the blog post Bitcoin Wallet hacked? 1 Billion US $ withdrawn.

That night I came across more tweets from Alon Gal (Under the Breach), which brought a little more light into the story. The DarkNet platform Silk Road was probably hacked by someone who then transferred the Bitcoin credits from Silk Road to his wallet. 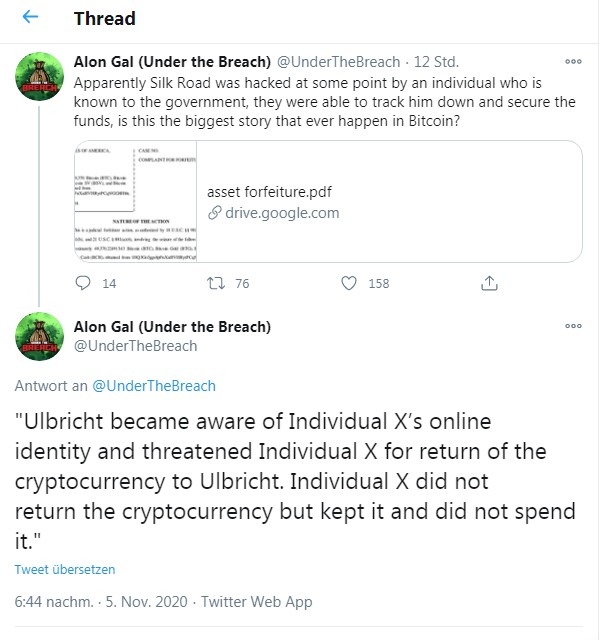 Ross Ulbricht, the founder of Silk Road, found out who this unknown person was. He demanded the return of the Bitcoins, but Person X did not. Instead, Ross Ulbricht is now in custody and is serving his two life sentences as the founder of Silk Road. The owner of the Bitcoins left them in the wallet all these years without spending them. Probably over Ross Ulbricht the U.S. authorities/punishers attained the identity of the person X. At least that's how I put it together from the above tweets.

Information of the US IRS (tax authority)

In a statement,  the US tax authorities (IRS crime unit) and the Department of Justice disclose details. Five years after Ross Ulbricht, founder of the dark web marketplace Silk Road, was sentenced to two life sentences, federal attorneys filed a civil suit on Thursday demanding the confiscation of Bitcoin assets. These were seized by law enforcement agencies on Tuesday and are currently worth over $1 billion.

"Silk Road was the most notorious criminal online marketplace of its time," said U.S. Attorney David Anderson in a press release from his San Francisco office. "The successful prosecution of the founder of Silk Road in 2015 left a billion dollar question unanswered. Where did the money go? Today's seizure (forfeiture, an order before something expires) answers this open question at least partially. $1 billion of this criminal proceeds are now in the possession of the United States."

The submitted documents indicate that in 2020, agents of the U.S. tax investigation agency IRS-CI would have used a third-party firm to analyze Bitcoin transactions executed by Silk Road. The agents identified 54 previously undiscovered Bitcoin transactions executed by Silk Road. All of these transactions appear to be related to Bitcoin thefts from Silk Road accounts in 2012 and 2013. The transactions were traced to a Bitcoin address. Further investigation of this Bitcoin address by the U.S. Attorney's Office and CI Agents of the IRS revealed that the funds were linked to Person X.

It was further determined that Person X had withdrawn the funds from Silk Road after a hack. This person then signed an agreement with the US Attorney. Following this investigation of the hack and the agreement with Person X, law enforcement forfeited several thousand Bitcoins from that very Bitcoin wallet on Tuesday. Now the United States must prove to a court that the Bitcoins are unlawfully the property of Person X and forfeit his property rights. If the United States prevails, the court will declare all interests of a potential plaintiff forfeited. In that case, the amount is likely to go into the US tax coffers.

The screenshot above shows some details Vice published in an article. Bleeping Computerhas also published articles with further information about the case.

This entry was posted in Security and tagged Bitcoin, Security. Bookmark the permalink.