[German]If you run Windows 10 in multiboot environments, you should disable the Fast Boot feature to save yourself trouble. Blog-reader Karl has written some remarks together.

The so called “Fast Boot” was introduced in Windows 8 to shorten the time needed to start the system. During shutdown Windows uses a trick to speed up the next startup. Before shutting down, Windows 8.1 – 10 terminates all running applications and closes the user session. But then the Windows kernel is not stopped, as in Windows 7, but from Windows 8 on, the operating system writes parts of the RAM with the image of the kernel in a file during shutdown.

At the next boot the saved system status (memory image, process status) is read back from the hibernation file (hiberfil.sys) and the drivers are reinitialized if necessary. The advantage of this approach is that when changing to hibernation mode, much less data has to be backed up than under Windows 7 hibernation mode (on Windows 7, the application images from memory are also backed up to the hibernation file). At startup, the system is ready to work again much faster than with conventional booting

But there are also disadvantages of the quick start, especially in multiboot environments with Windows 10. Blog reader Karl has taken up the topic of quick start (Fast Boot) in a series of tweets and has written some comments on it together. He writes that if you have a fast computer with SSD /NvME under Windows 10, you should consider disabling quick boot. 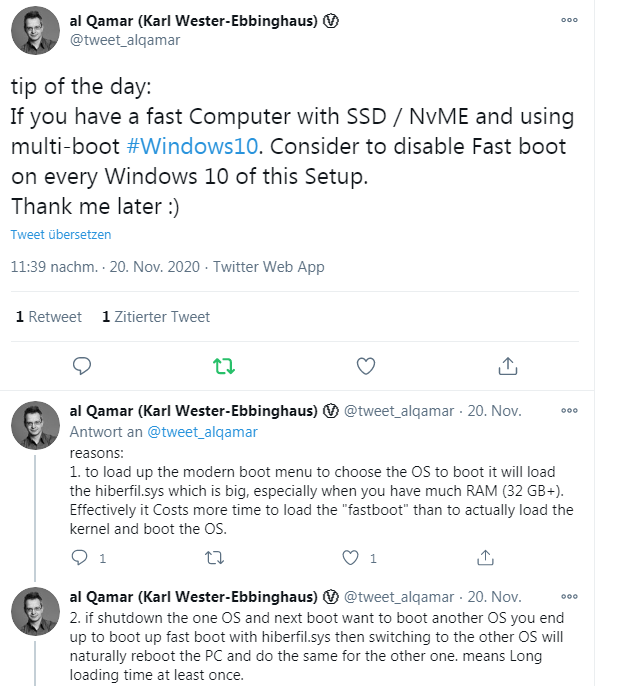 The first argument goes in the direction that the hiberfil.sys hibernation file becomes simply huge by storing the kernel image on machines with a lot of RAM. Then the loading of this file takes more time than it is needed to boot the operating system and load the kernel. Also when rebooting with change to another operating system installation, this process is finally slowed down by the quick start. Karl deactivated the quick start in his lab for several multiboot Windows 10 installations and saved 4 x 64 Gbytes of memory.

This entry was posted in Windows and tagged Tip, Windows 10. Bookmark the permalink.