Metro of Vancouver is victim of a ransomware infection

[German]The IT systems of the metro transport system of the Canadian city of Vancover are affected by a ransomware infestation. The operator TansLink is currently experiencing billing problems because files on the servers are encrypted.

Bleeping Computer reports here about this cyber incident. TransLink made the incident public on December 1, 2020. The following tweet shows an outline of the ransomware message. 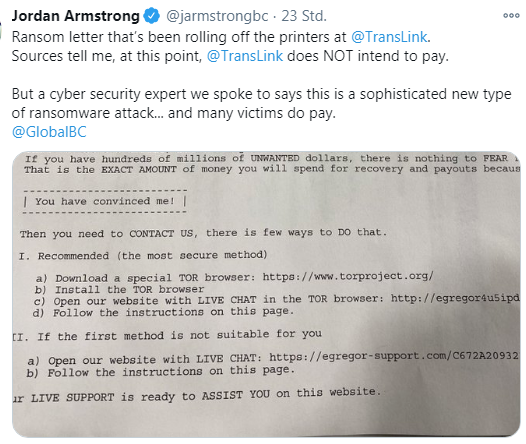 Translink, the operator, has admitted the incident and reported that there were problems with their IT systems affecting phones, online services and the ability to pay fares with a credit or debit card. Transportation operations were not affected by the IT problems.

Specifically, there was a ransomware infestation, behind which the Egregor Group is behind the problems. The cyber attack caused disruptions in services and payment systems. The group is also behind the attack on Ranstad (Egregor ransomware infection at Randstad), which was just reported.