[German]Will individuals and schools soon be able to keep their old Windows computers running Google's Chrome OS? That's what an acquisition on Google's part, which just came to my attention, suggests.

Google has made a move and quietly acquired the vendor Neverware. This company offers CloudReady software that can turn an old PC into a Chromebook running Chrome OS within 15-20 minutes. This is free for individuals and schools. 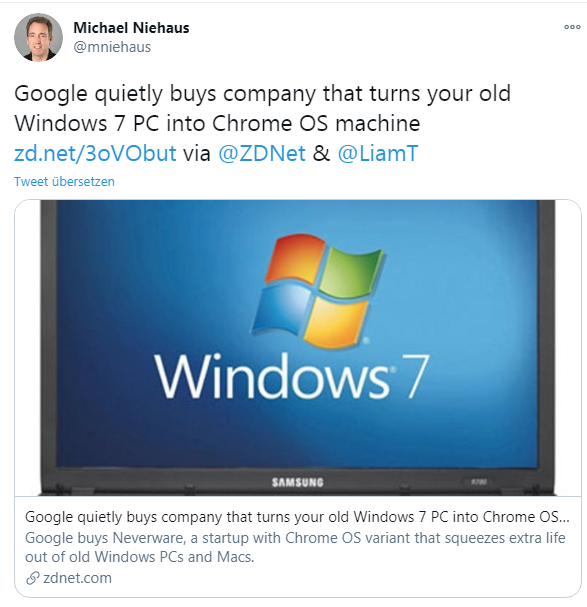 I had seen the info briefly the other day, but stumbled across the above tweet from Michael Niehaus. The message: Google has bought Neverware to convert (with CloudReady) Windows 7 PCs into Chromebooks.

CloudReady, can turn almost any device (up to 13 years old) into a Chrome device. Users have access to the exact same features as Chromebook buyers, but at 1/3 the cost.

CloudReady could be the perfect answer for those who want to continue using their old Windows 7 PC, stop getting free security updates after Jan. 15, 2020, and don't want to experiment with ESU solutions or switch to Linux. A CloudReady machine, on the other hand, will still get patches and fixes, just like Chrome OS, distributed every six weeks. And the resource burden of a Chromebook is minimal (compared to Windows). I confess, the days this very thought was going around in my head in the direction of CloudReady, because I want to convert an old netbook of my daughter in this direction. I had even done some research, but haven't gotten around to it yet due to lack of time.

The announcement of the acquisition by Google can be found on the NeverWare page here. There it says that NeverWare is now part of Google.

We're pleased to share some very exciting news: Neverware and CloudReady are now officially part of Google and the Chrome OS team! We're looking forward to sharing more details with all our CloudReady customers, users, and fans in the coming weeks and months, but for now, please review the following for answers to some of your anticipated questions:

In an FAQ, it says that in the short term, there should be no change to the current policy, CloudReady will continue to be available as is, and we are committed to supporting and maintaining existing customers. In the long term, however, CloudReady will become an official Chrome OS offering, and existing customers will be seamlessly updated when that happens, the vendor writes. I think this could still be exciting, as many schools in the U.S. are embracing Chrome OS and the low-cost Chromebooks. Both, Engadget and ZDNet have published articles on the topic.

This entry was posted in devices, Software and tagged ChromeOS. Bookmark the permalink.