[German]Once again revisiting an unpleasant issue. Automatic update installation is one of the mortgages placed on users of unmanaged Windows 10 systems. This includes .NET Framework preview updates being installed automatically.

Normally, preview updates should be optional, only found during an update search, and then the installation must be explicitly triggered by the user. At least, that's what Microsoft had communicated a long time ago.

It boiled up again the days at the .NET Framework Preview Update KB4598299. Blog reader Hans Thölen wrote me the following via email:

Today on Windows Update I had 2 updates : The cumulative update KB4598291 I was able to get going myself by clicking on the "Download and Install" button. The update KB4598299 installed itself. The installations ran smoothly and absolutely error-free in a time span of 30 minutes for me. In the list "Show update history" the 2 updates are not present. In the list "Uninstall Updates" the 2 updates are entered as installed updates. 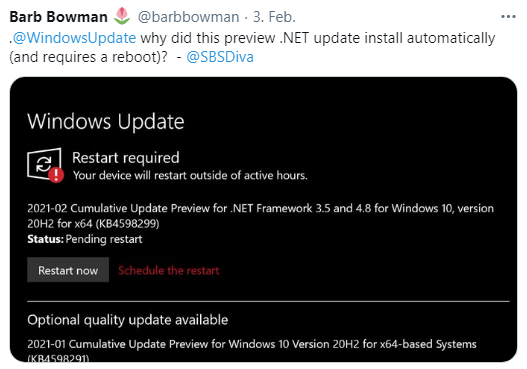 In the above tweet, Barb Bowman also raises the question why the preview update KB4598299 for .NET Framework 3.5 and 4.8 is automatically installed on Windows 10 and then also requires a reboot.

I had already pointed out this issue in November 2020 in the blog post .NET Framework preview updates and the unsolicited installation. There is also the information that this can lead to collateral damage when optional updates are pending, which are then installed with the download. At this point, I'm not saying "Windows 10 update is broken", no, that's just the incredibly fun fact of the WaaS model (WaaS = Windows as a Surprise). Those who can't run Windows 10 in managed environments are likely to experience unpleasant update surprises over and over again. Or have any of you come across an explanation from Microsoft for this behavior?

This entry was posted in Update, Windows and tagged Update. Net Framework, Windows 10. Bookmark the permalink.