Windows 10: Legacy edge browser to be removed via update in April 2021

[German]In April 2021, Microsoft will remove the old Edge browser from Windows 10 so that only the Chromium-based browser can be used. Microsoft has just announced this.

Old browser will be out of support

In Windows 10, Microsoft currently affords itself the luxury of having three browsers integrated at once, but this has come about historically.

This means that after the above dates, customers will no longer be able to connect to Microsoft 365 apps and services in IE 11.

End of support for old Edge in March 2021

It was already noted in the comments on my blog, but I had also seen it on Twitter the days: The days of the legacy Edge browser are counted on Windows 10. 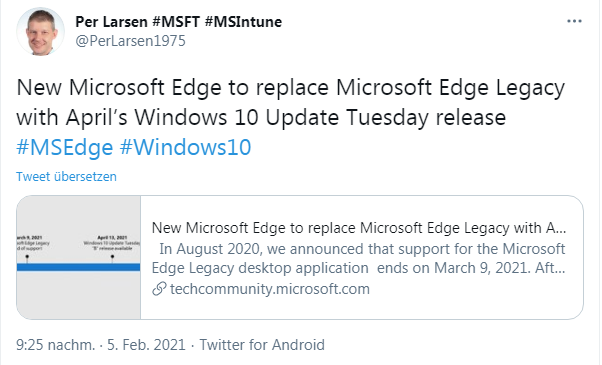 In the tech community post New Microsoft Edge to replace Microsoft Edge Legacy with April’s Windows 10 Update Tuesday release, Microsoft specifically announces that the old (legacy) Edge browser will be removed from Windows 10 on April 13, 2021 – as part of Patch Day.

According to Microsoft, the whole thing applies to the following Windows 10 versions:

However, nothing will change for Windows 7 and Windows 8.x. The Techcommunity article still contains a FAQ that provides answers to various questions. From April 2021, the above Windows 10 versions will only include the new Edge browser.

By the way, the colleagues from deskmodder.de point out here, that users with older hardware that cannot update to new Windows 10 versions will then be on the road with a browser that no longer gets support. One user received the message “This computer will soon stop receiving Microsoft Edge updates because its hardware is no longer supported.” received. The user is using a system with an AMD Athlon 64 3800+ CPU. This clearly shows how clumsy it is to anchor a browser in the operating system.

This entry was posted in browser, Update, Windows and tagged Edge, Windows 10. Bookmark the permalink.