[German]Users of the Spotify service are likely to get another headache. A security researcher has found a database with over 100,000 access data for Spotify user accounts. These are likely to have been obtained via credential stuffing attack and allow unauthorized third parties to access these user accounts on Spotify.

Security researchers at vpnMentor came across an unsecured Elasticsearch database on the Internet at the time that contained over 380 million records, including credentials and other user data validated against the Spotify service. The origin of the database and how the fraudsters targeted Spotify are both unknown. The hackers may have used credentials stolen from another platform, application or website and used them to access Spotify accounts. Details can be read in the blog post.

On February 4, 2020, security researcher Bob Diacheko announced in this tweet the discovery of another database containing over 100,000 Spotify account credentials. 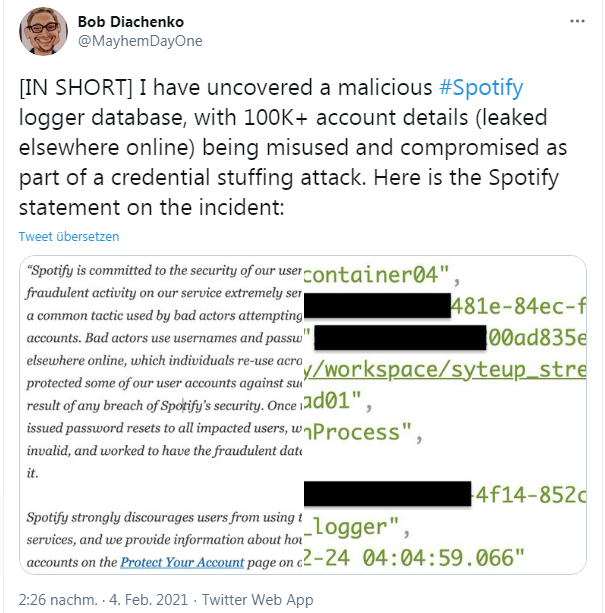 Here, too, the data was captured via credential stuffing and then misused to access Spotify accounts. Spotity resets the passwords as soon as misuse becomes known. In addition, people try to have the database removed from the Internet via the providers – but this is no real help (there may be many copies). The site hackread.com has also presented the case here.