[German]SonicWall has released a second firmware security update for its SMA 100 to close a 0-day vulnerability. Administrators should install this update immediately as the vulnerability is being exploited.

SonicWall had warned of a 0-day exploit actively being exploited to attack SonicWall Secure Mobile Access devices in the SMA 100 series in late January 2021. SonicWall had published this security alert on the subject as of February 1, 2021. There, a zero-day vulnerability in the SMA 100 series 10.x code was confirmed. SMA 100 firmware prior to 10.x is not affected by this zero-day vulnerability. I had reported that in the blog post Warning: 0-day exploit used to attack SonicWall SMA 100. A patch had been announced and shipped by the vendor for February 2, 2021 (see this article from Bleeping Computer).

The colleagues from Bleeping Computer point out in the following tweet that SonicWall has released another firmware update to secure against the 0-day vulnerability in the code SMA 100 series. 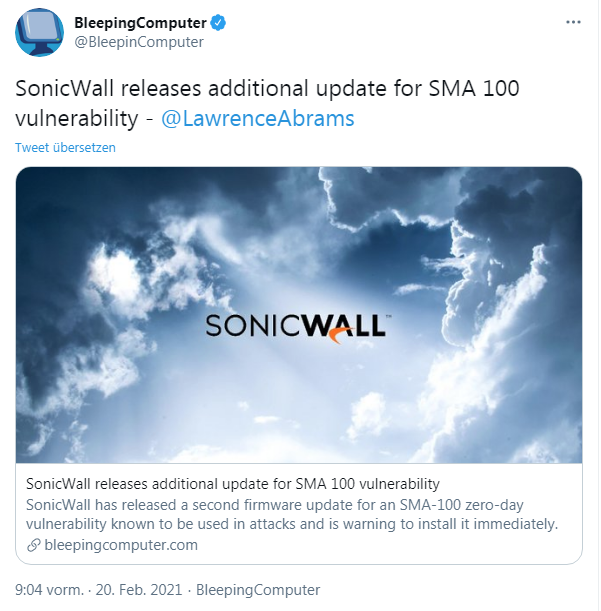 Following up on the Feb. 3 firmware update outlined below, SonicWall is announcing the availability of new firmware versions for both 10.x and 9.x code on the SMA 100 series products, comprised of SMA 200, 210, 400, 410 physical appliances and the SMA 500v virtual appliance.