Windows administrators get full control over driver and firmware updates

[German]In the context of the digital developer conference Ignite 2021, Microsoft also announced a new approach for installing driver and firmware updates. Windows administrators are expected to have full control over these updates at some point in the future.

I already came across the following tweet from Bleeping Computer over the weekend. The covered the whole topic here. I’m only preparing it today because this is a future topic and it only affects administrators in enterprise environments who manage systems via Windows Update for Business or Intune. 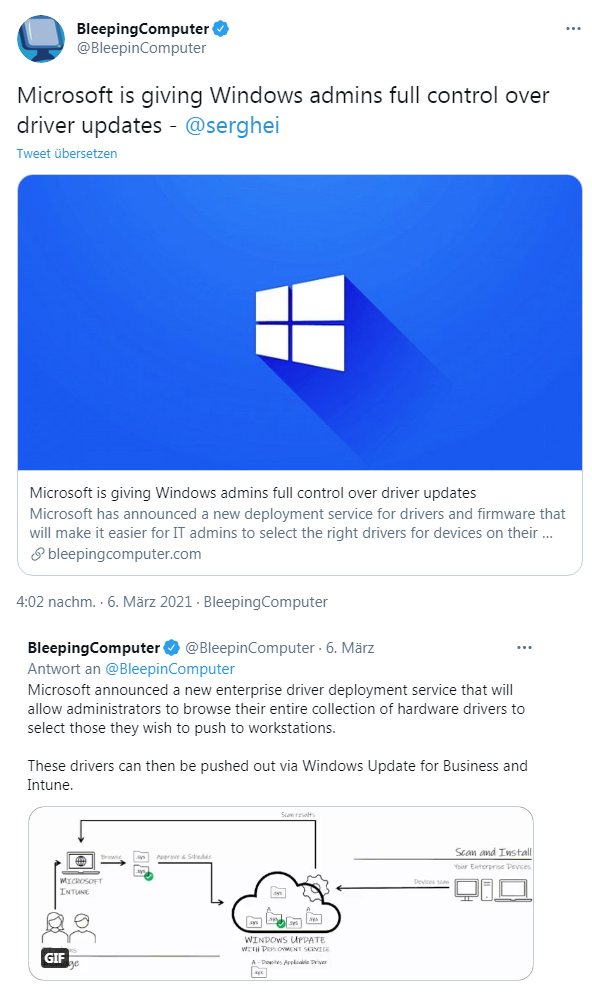 The details was published by Microsoft in two tech community posts Windows & Devices at Microsoft Ignite 2021: March edition (February 26, 2020) and Introducing a new deployment service for driver and firmware updates (March 2, 2021). The beef can be found in the latter post. There, Microsoft once again tells us that they have heard the feedback of IT administrators. Administrators claims to have more support for ongoing driver updates (includes firmware) on managed devices. In the above post, Microsoft describes plans to allow administrators to browse all drivers (Microsoft plans to use that term for both drivers and firmware in the future) on Windows Update and decide which updates to deploy to which devices and how. In addition, Microsoft writes that a new deployment service will provide reporting capabilities that will allow administrators to monitor driver deployment and its results.

From vendor to device

Drivers need to be updated often for functional and security reasons. Drivers are primarily developed by independent hardware vendors (IHVs) such as Intel or Realtek and original equipment manufacturers (OEMs) such as Dell and Lenovo. This driver development for Windows devices includes hundreds of partners who continuously create new drivers and provide updates for existing drivers.

All drivers must be certified by the Windows Hardware Dev Center and signed by Microsoft in order to be installed by Windows. Drivers are most often published via Windows Update with specific target parameters that identify individual hardware components, computers, operating system versions and/or a combination of these elements. Microsoft says, that they enforces a robust release process aimed at allowing only the highest quality drivers into Windows Update. Post-release rollout monitoring is used to quickly find and fix issues with the hardware partner that released the update.

Microsoft will launch a new enterprise driver deployment service as a private preview program in the coming weeks. IT administrators will be able to access the deployment service in Intune by creating driver update policies and assigning devices to them. The service will be publicly available in Intune and via Microsoft Graph in the second half of 2021. The details of what great new capabilities are available can be read in the Techcommunity article.

This entry was posted in Windows and tagged Driver, Firmware, Update, Windows 10. Bookmark the permalink.