[German]Short summary of various topics for Windows 10. For example, Microsoft is working on integrating the Bluetooth AAC audio codec into Windows 10. In addition, a problem was solved that programs were arranged differently after waking up from standby mode. And over at Scott Hanselmann’s site, I came across a tip on how to solve the problem of not running just one or all monitors in full-screen mode during RDP sessions.

The acronym AAC stands for Advanced Audio Coding, and is a lossy audio codec used by Apple devices (e.g. iPhones, iPads) and audio streaming platforms to enable high-quality audio streaming at low bitrates. Microsoft is in the process of building corresponding support into upcoming version of Windows 10, as noticed by Bleeping Computer colleagues here.

The official announcement was made in this April 29, 2021 Windows Insider blog post about Windows 10 Insider Preview build 21370. Over the past few months, Microsoft’s developers have been adding new features to Windows 10 to make Bluetooth audio streaming easier, better and more powerful. This includes support for the AAC audio codec for Bluetooth headphones and speakers. .

When Windows 10 was in standby mode with multiple monitors via the DisplayPort, there was a silly bug. Those who had application windows arranged on the monitors and the system went into standby (energy saving) during work breaks often had a problem. When the system was reactivated from this state, Windows rearranged the application windows – sometimes the windows were shifted or appeared only on one screen. A user then had to rearrange the windows before they could continue working.

The colleagues from German deskmodder.de noticed due to a reader tip that Microsoft has taken this up. In the DirectX developer blog there is the blog post Avoid Annoying Unexpected App Rearrangement – Your PC Can Sleep Without Nightmares. There, Microsoft announces that they have taken care of the problem and that this has been fixed as of Windows 10 Insider Preview build 21287. Was anyone affected, and is this behavior now fixed? Within my German blog I got the 1st feedback, that nothing has been fixed.

With multi-monitor operation, there is a problem with remote access (RDP) if not only one screen or all monitors, but only a selection, are to be operated in full screen mode. I became aware of this via the following tweet that Scott Hanselmann wrote something about it. 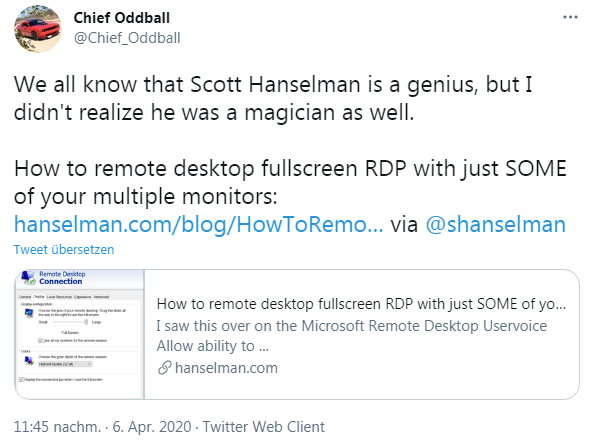 When configuring monitors for RDP sessions, by default there is only one checkbox to run all monitors in full screen mode. Or only one monitor is specified for the RDP session. But there is no option to select only two or three monitors for full screen RDP sessions. Scott Hanselmann disclosed in this post that you can customize the RDP configuration data in a text editor. The entry selectedmonitors:s:x,y can be used to specify which monitors to use for the RDP session. This Microsoft document describes the parameters within the RDP file.

This entry was posted in Windows and tagged issue, Windows 10. Bookmark the permalink.