[German]Currently, there are more and more reports that no updates are found in the Windows Server Update Service (WSUS). Only Defender updates are trickling in – it looks like Microsoft is not (yet) making the May 11, 2021 security updates available in WSUS.

I saw the first message on May 11, 2021 at 19:47 (CET) at the colleagues of German site administrator.de in the post Keine Updates zum Mai-Patchday über WSUS? There it said:

we download the Windows updates via our WSUS (Server 2012R2). Now I just realize with surprise that there are no updates as of now (19:45)?
Only Windows Defender updates have been downloaded.
Can anyone confirm this?

At this point I had not received any feedback from other administrators about this issue here on the blog. However, in the meantime (22:53, CET) there are numerous feedbacks regarding this (all texts are translated from German to English):

It looks like these are not isolated cases – and the WSUS instances are not faulty either. Markus B. writes here:

the synchronizations are shown as successful. Seems that they may have blocked the patches on their end and therefore this is shown as a successful sync on our end since no patch is released.

David James from Microsoft confirms an issue, that shall be solved in a couple of hours. See also the following tweet, that indicates a wrong time zone preventing the update sync – in this case, updates shall arrive in a few hours, depending on the time zone. 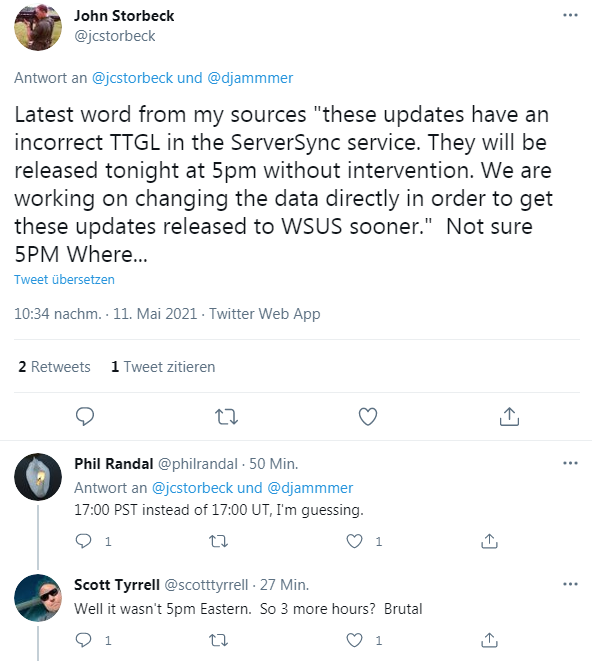 If who has new insights, he can leave a comment. Addenum: See the blog post Microsoft's confirmation of a WSUS sync issue – failing to receive updates (May 11, 2021)

This entry was posted in issue, Update and tagged Update, WSUS. Bookmark the permalink.