[German]German BSI and security researchers has issued a warning because a vulnerability called FRAGAttack allows millions of WLAN devices to be attacked locally. The vulnerability affects all WLAN standards (up to WPA3). Fortunately, this vulnerability can only be attacked if the attacker is in the WLAN’s reception range. Here is some information about FRAGAttack.

From the German BSI (Federal Office for Information Security) there is the following warning via tweet about the vulnerability called FRAGAttack (fragmentation and aggregation attacks). Security researchers published their findings on numerous WLAN vulnerabilities that can affect both WLAN routers and the devices connected to them on May 11, 2021. An attacker within range of a victim’s WLAN wireless network can abuse these vulnerabilities to steal user information or attack devices. 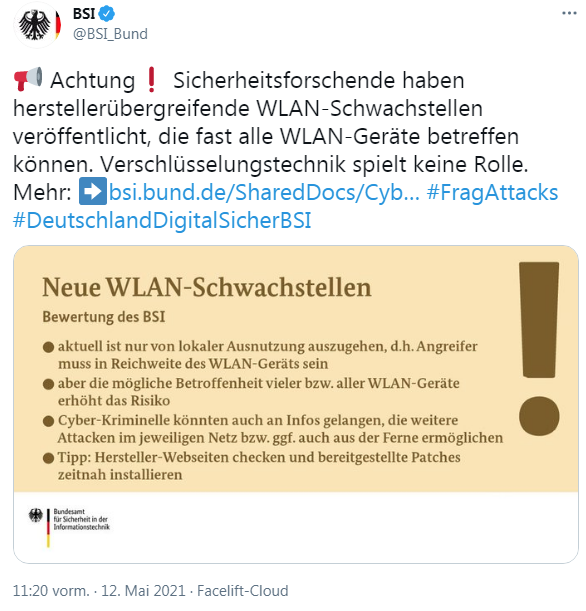 The video above demonstrates the exploitability of the vulnerabilities. A detailed description of the vulnerabilities and threat scenarios can be found on this website. Manufacturers informed in advance by the discoverers have been given the opportunity to check the facts and provide patches if necessary. Currently, the BSI has no information on which devices are affected by which vulnerabilities or whether patches have been/will be released.

The vulnerabilities are difficult to exploit and require an attacker to be near a WLAN. The CVEs assigned to the vulnerabilities have a severity level between 4.8 and 6.5. In other words, there is currently nothing to do but wait and hope that manufacturers provide firmware updates for their devices.