Windows 10: Changes and strange behavior with driver updates via WSUS

[German]I'm summarizing two topics that have been lying around for a while in a collective post. It's about the possibility to install drivers in Windows 10. In Windows 10, Microsoft has made an update to the device manager in the Insider Previews at the beginning of May 2021 to better manage drivers. And a blog reader contacted me by email back in March about some driver installation oddities related to WSUS and Windows 10 that he noticed.

In the Windows 10 Insider Preview Build 21382, Microsoft has presented a new feature in the device manager in the Windows blog, which may be in version 21H2 for the general public:

As some Insiders have noticed, Device Manager now has the ability to view drivers alongside of devices. The new driver focused "Devices by drivers", "Drivers by type", and "Drivers by devices" views enable users to view, install, and remove drivers, while the new "Add drivers" action enables users to add and install new drivers across all applicable devices. Managing drivers directly is more intuitive in many situations than working with them by way of the devices they are installed on, so we hope that developers and power users alike will enjoy the added flexibility. This change was added in Build 21343.

Lawrence Abrams already addressed this in more detail in early May 2021 in this article on Bleeping Computer. And on Softpedia I had seen it as well.

Blog reader Johnny B. contacted me by mail back in mid-March 2021 to let me know about a Windows driver installation change. Has been left because of the Exchange issue, but not lost. So I am just posting the information here on the blog as the reader is interested in feedback from other administrators. Johnny writes:

For a few weeks now, I've been dealing with a topic that I can't find any information about on the Internet, since I think Microsoft has added this feature to Windows 10 via updates. I have already prepared the topic in the Spiceworks community including screenshots in this post.

At first I thought that Microsoft has changed something here regarding the GPOs and my clients no longer install drivers, but it is not so.

Via WSUS drivers are still installed normally, but there is now a "new" additional way to install drivers by clicking on the "optional updates" button.

There you get more driver updates and even firmware/bios updates which don't seem to come via WSUS. I would like to set the clients to install the new optional updates automatically, but unfortunately I fail.

Since my clients still have many driver updates stored in these new optional updates, even though WSUS is set to automatically enable all driver updates, I think that Microsoft distributes newer updates via WSUS.

There I also see Bios updates that my clients are missing (applies to my many small clients without SCCM) which would be good if they are installed.

On Spiceworks, Johnny writes that he runs an HP laptop with Windows 10 20H2, which got all updates from WSUS. WSUS is set to accept all updates and drivers automatically (as if using Microsoft update). Here are the displays of Windows Update and the update history of the Windows 10 system – the updates are managed by WSUS: 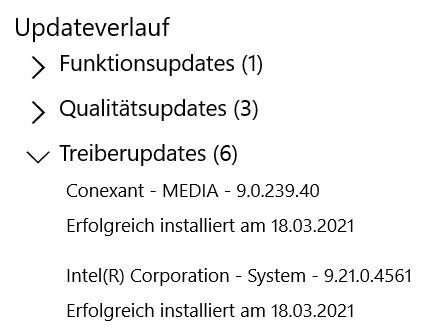 Johnny writes that (probably since February 2021) Microsoft added a new button/option for Optional Updates, even if the computer is managed via WSUS: 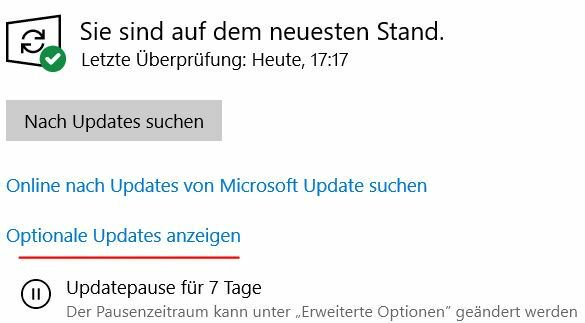 Anyone who clicks on this button will be offered new updates:

Johnny comments: It seems that these driver and also firmware updates are not included in WSUS or normal Microsoft update, but are only available through these new optional updates. He asked me if I had any information about this, but I had to deny it. So I'll just pass it along to the blog readership that works with WSUS. Is there anyone who has an explanation for this behavior?

This entry was posted in Windows and tagged Driver, Update, Windows 10. Bookmark the permalink.