[German]Microsoft recently held an "Ask me anything" (AMA) session on Windows 11, where some strategies were presented. For example, there will be no quarter for systems that do not meet the hardware requirements – tricks to get around the installation hurdles are not supposed to exist. In addition, some information about the topic of app updates was revealed – so they don't have to be updated via the store. Here is a brief overview of these topics, enriched with my thoughts on sustainability and Microsoft Teams as a Trojan horse for the IT solutions of the coming years.

Microsoft has been releasing little tidbits of information about Windows 11 lately. This includes an AMA session as well as hints about app updates.

On Techcommunity, an Ask me anything (AMA) was announced on July 21, 2021 under the title AMA: Windows 11 upgrade paths and deployment tools. The AMA was aimed at users or administrators who are planning to migrate from Windows 10 to Windows 11, but are unsure which tools to use for the migration. The whole thing took place virtually and is available as a video at the link above.

From the AMA session it is said that no Windows 11 will be deployed on machines unless they are compatible in terms of hardware requirements. They told us: We know it will be dumb that some will not be suitable for Windows 11, all is for the good of customers. There will also be no way to get around this installation blockade with group policies.

Specifically, the questions about TPM 2.0 mandatory and support only for 8th generation Intel CPUs or AMD processors starting with Ryzen 2000 will leave many systems as unsuitable for Windows 11. Microsoft's reasoning:

We don't want all admins or end users to worry about compatibility all the time. We really want to make sure that devices stay secure and supported.

The message from the AMA session is, that Microsoft is clearly betting on a new generation of hardware and many older systems will stick to Windows 10.

There will also be apps from the Microsoft Store in Windows 11, whereby its design will be completely renewed. Microsoft wants to give app developers a lot of freedom regarding the apps offered via the store. Both MSPU and Windows Latest deal with this topic. 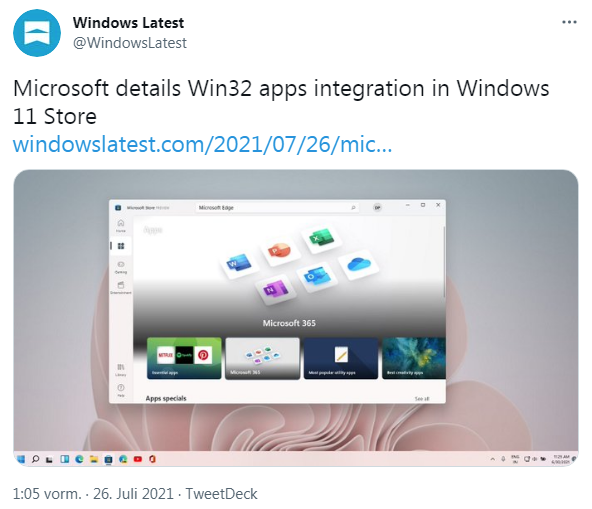 According to Microsoft, the Windows 11 native app store will allow apps based on various frameworks (Win32, .NET, Java, UWP and also web apps). Some discussion arose regarding traditional Win32 apps, which may well be posted to the Microsoft Store by their developers as unpackaged applications.

Then Microsoft documentation is quoted as saying that there will be no updates for unpacked Win32 programs in the Microsoft Store of Windows 11. But that's pretty much a no-no, since traditional Windows programs (.exe) have also been getting updates directly from developers so far. The only problem that some people see: Through this story, it will remain, as before, that each application comes along with its own update mechanism. Has already led to controversy on the web.

I don't even want to get involved in the discussion about which CPUs should now be supported or whether TPM 2.0 will be mandatory or not. But I find it very exciting what is going on at the moment. I've been around for a couple of decades now, and at every operating system launch, Microsoft tried to emphasize how well it ran with the old hardware. With Windows 8.x, it was very important that it would run on all systems that were suitable for Windows 7. Even with the presentation of Windows 10 RTM, it was still said that this Windows would run on all machines that could run Windows 7 and Windows 8.x.

In the first year of the release of Windows 10, that is, July 2015 to July 2016, Microsoft did, after all, offer existing Windows 7 and 8.1 systems the free upgrade to Windows 10. We remember the unpleasant forced upgrades happening via the GWX app in this period, where machines with Windows 7 or Windows 8.1 were updated to Windows 10, often unintentionally.

And now Microsoft is turning about 180 degrees and designing an operating system that leaves a lot of machines as incompatible. When it was announced that the development of Windows 10X would be stopped (see Plug pulled: The End for Windows 10X …), it was said:

Instead of launching a product called Windows 10X in 2021, as we originally intended, we are using the lessons learned [from the past] to accelerate the integration of key foundational 10X technology into other parts of Windows and products in the enterprise.

IMy thought: "is this to be understood as a threat" went through my mind at the time. A paradigm shift is just emerging at Microsoft. The maximum support of the hardware is no longer valid, but only what Redmond (and the hardware manufacturers) have found to be good. By 2024 at the latest, when Windows 10 is no longer supported, many computers will be sent to the electronic scrap heap – unless their owners get their act together and switch to Linux. This is nothing more than a gigantic hardware sales boosting program that is started with Windows 11.

I just received the Microsoft newsletter for July 2021, bearing the title Windows 11, sustainability and climate protection, Windows 365 – Cloud PC of the future

Within the text, it becomes clear what is really meant by sustainability strategy: cloud and commitment to a CO2-free power grid. But the fact that in the same breath they announce products that kick out millions of well-run systems as unsuitable and leave them behind as electronic waste is a contradiction.

Something that should still be a major headache for both Microsoft and the companies is the integration of Teams into the Windows 11 operating system. When I read this, the first thing that went through my mind was "here comes the slap from the competition authorities as soon as there is a first complaint from the competition". Because Microsoft's plan is once again the stupidest thing a manufacturer can do.

The Register has taken the whole thing up in a broader context and writes: Like every generation in times of peace, the following generations have also forgotten the war or the conflict. The reference is to the browser war that raged between Netscape and Microsoft's Internet Explorer nearly 20 years ago. By bundling IE with its operating system, this browser was able to gain a huge market share. Then came the EU requirement that made the browser selection screen mandatory for Microsoft and also cost the company a fat sum in fines.

Well, every management generation at Microsoft has the right to take a beating, and the guys and gals in Redmond are really craving a good thrashing. That's because the integration of Teams into Windows 11 inevitably leads to two conflicts that can't be resolved:

If Microsoft now announces the cheerful message of Windows 11, it is their right. But for these last two reasons alone, I see a chrash landing by Microsoft in the European Community, where they will probably have to make improvements. Unless Microsoft feels to secure in the meantime that it has politics completely in the bag because there is no alternative. Then the privacy commissioners should declare themselves biased and quit their jobs.

The Register sees Windows 11 Teams integration as the Trojan horse to dominate the market. What saved the world, The Register said, was open Internet standards. Microsoft couldn't get its way, no matter how hard Redmond tried. This time, those standards don't exist, The Register said. And where standards do exist, they would not be used by the big players who control the entire chain from start to finish. Third-party endpoints are not allowed. Nadella's strategy, after all, was that no matter what device (Windows, Apple, Google Android) the user was on, they would always use a Microsoft app. If Teams prevails as a communication medium, the next monopoly in this area is cemented – the Trojan horse Teams has then determined the storming of this bastion.

So it looks like conflict-ridden years ahead. Which already frustrates me a bit, personally: You read about such aspects in the happy shiney blogs and websites of this Internet almost nothing. But maybe I see it all too pessimistic again and there is nothing better than to go into the arms of Microsoft and spend the next years totally dependent. Sustainability is just a word that is used when it is useful or sounds good. But what does a small blogger know about the big world, especially if there is no alternative.