[German]New information on SolarWinds supply chain attack on Orion software. Tens of thousands of companies and organizations around the world were compromised via the attack, which was suspected to be attributed to Russian state-related hackers. The U.S. Department of Justice (DOJ) has now announced that 27 U.S. government agencies were also affected by the SolarWinds hack.

Suspected Russian state hackers had succeeded in hacking the Orion software of the US company SolarWinds in 2020. In a supply chain attack, the attackers managed to roll out a Trojan with this software to tens of thousands of companies and organizations that used the Orion software via software updates. The Trojan implemented a backdoor that left tens of thousands of agencies, organizations, and companies vulnerable to attack via the SUNBURST vulnerability.

The hackers used this backdoor to penetrate victims' networks undetected for months, infiltrating Active Directory systems and spying on users' Exchange accounts. This operation only came to light in December 2020, when the security provider FireEye noticed corresponding activities in its own network. I had reported on this issue in several articles (see links at the end of the post).

The US Department of Justice (DOJ) has now announced that 27 US Attorney's Offices were also affected by the SolarWinds hack. I became aware of the issue via the following tweet. 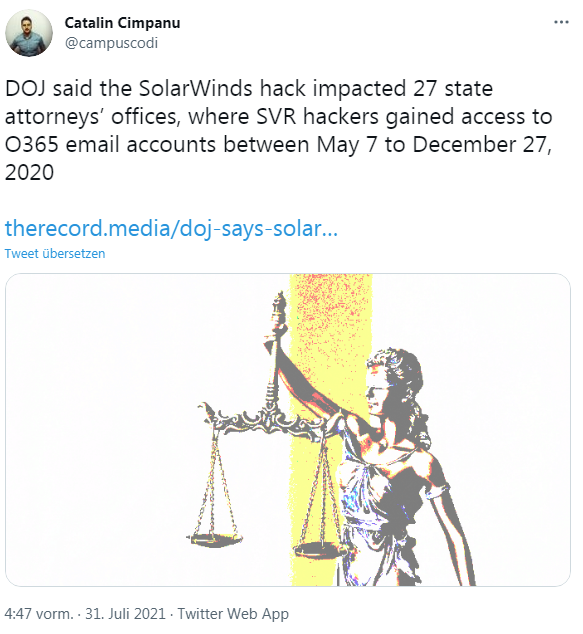 The Department of Justice (DOJ) had already confirmed on Jan. 6, 2021, that the SolarWinds hack included hackers penetrating the department's Microsoft O365 email environment. In order to promote transparency and provide further leads to potential victims, the ministry has decided to disclose further details. The Department of Justice has now confirmed that the Microsoft O365 email accounts of one or more employees at the following U.S. Attorney's Offices were compromised in connection with the SolarWinds incident:

It is believed that the APT group had access to the compromised accounts between May 7 and December 27, 2020.  The compromised data included all sent, received, and stored emails and attachments found in those accounts during that time period.

While other districts were affected to a lesser extent, the APT group gained access to the O365 email accounts of at least 80 percent of employees working in U.S. Attorneys' offices in the Eastern, Northern, Southern, and Western Districts of New York.  The Executive Office for U.S. Attorneys has notified all affected account holders, and the Department has provided guidance on identifying specific threats.