[German]Brief note to administrators who are also responsible for Microsoft Azure. Microsoft has released Azure AD Connect 2.0.10.0. This is intended as a hotfix to work around issues that occur when renaming a domain.

What is Azure AD Connect?

Frank Carius, a German Exchange expert, summed it up in one sentence on msxfaq.de in einem Satz auf den Punkt gebracht: AADConnect is the new name for the building block that connects an on-premises Active Directory to Azure AD, i.e. synchronizes identities (users/groups) to the cloud. If you need a more detailed explanation, go to this Microsoft page.

I came across this information over the weekend via the following tweet from Yusuf Dikmenoglu, Microsoft Principal Customer Engineer. 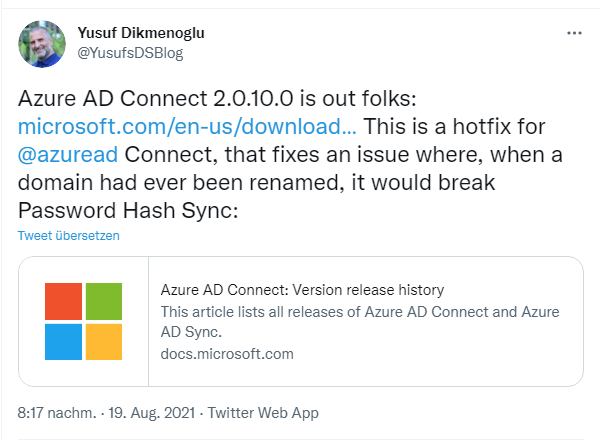 This entry was posted in Cloud, Software and tagged Azure, Hotfix, Software. Bookmark the permalink.