Osram Lightify: Cloud service will be discontinued on 2021/08/31 – features will be lost

[German]At the end of the month August 2021, OSRAM is shutting down its Lightify cloud service. Users who use the Lightify lights will have to take action before August 31, 2021, to keep the bulbs still working and avoiding to sitting in the dark. Here are a few details about the matter.

What is Osram Lightify?

Osram Lightify was, I guess you have to say now, a system of lights that could be controlled via smartphone and tablet over the internet or via WLAN using a smart home gateway. I don't really have a sense of how popular the system was compared to Philips Hue lights. .

Osram Lightify cloud service to be shut down

Already in March 2021, Osram had probably announced the end of the cloud service necessary for Lightify operation. Now there is confirmation on the company's website that the service will be discontinued on August 31, 2021. 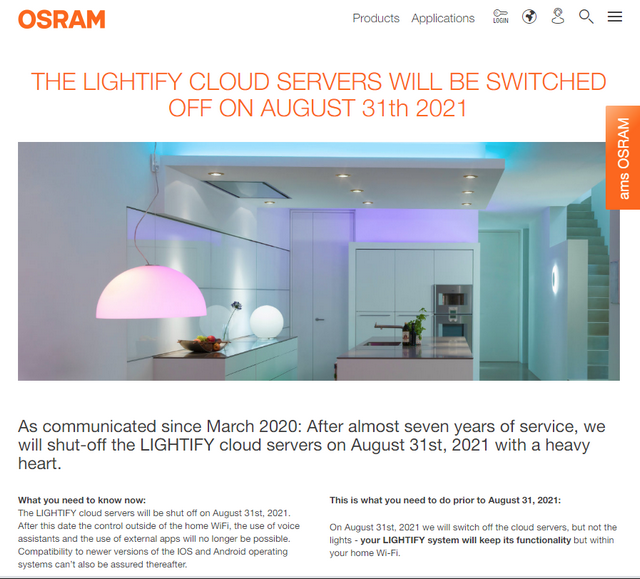 The text states that on August 31, 2021, OSRAM will discontinue server operation and support for LIGHTIFY. From this date, it will no longer be possible to control the system from on the road, with the help of voice assistants or through external apps (smartphone, tablet via the Internet). OSRM also does not want to ensure compatibility with possible new versions of the operating systems of iOS and Android then, as they also do not want to provide updates and support for the apps.

The manufacturer writes that the operation from home via the LIGHTIFY app in the WLAN remains unchanged if the app and gateway are up to date. However, users must respond to OSRAM before the deadline of August 31, 2021.

According to OSRAM, the latter point affects all gateways that have never been used and those that have not been updated in the last 4 years. The update recommendation refers to Lightify gateways with a WLAN firmware version lower than 1.1.3.53.

OSRAM justifies this step with the fact that the LIGHTIFY system is now technically obsolete. The performance of the outdated gateway (including response speeds and the control of individual devices) is significantly worse than that of alternatives on the market.

The ZigBee® standard used has also evolved in recent years (from ZigBee® Light Link and ZigBee® Home Automation to ZigBee® 3.0), making compatibility with other smart home systems increasingly difficult. Thus, extensive investments would be required, which OSRAM will no longer be able to bear after withdrawing from the end consumer business for general lighting in 2016.

As someone with roots in the craft, I've always been critical of all the IoT stuff in the home. Because there was the old experience: Everything you install costs and will break at some point. In such a case you have to troubleshoot and fix the issues. And in many cases, you won't get any spare parts. The case above shows me once again that I was probably right. Here's where LIGHTIFY system owners are faced with the fact that while the LIGHTIFY system still work for a while, some feature has been neutered. And as soon as new versions of Android or iOS arrive on mobile devices, the operability of the required apps is no longer guaranteed. If a gateway breaks, that's it, because there is unlikely to get a replacement.

In the late 1960s, as an apprentice, I was still repairing electrical installations and replacing switches, sockets or lamps that had worked for 20, 40 or 60 yearsthem. And in 2019, I sold a house that was also almost 60 years old – the electrical system installed at that time can be repaired at any time with little effort – switches, sockets, etc. are DIN standardized and easily replaceable. Digitalization will be our Waterloo: from a point of security a nightmare and from the longevity as well as compatibility also – there is nothing sustainable, everything is coming with built-in obsolescence.

This entry was posted in devices, issue and tagged IoT. Bookmark the permalink.

1 Response to Osram Lightify: Cloud service will be discontinued on 2021/08/31 – features will be lost