[German]There is a bug in Android that causes the clock app to no longer reliably execute alarms. Entered wake-up times are then simply no longer signaled by the app, and the user misses the appointments. Now Google has promised to fix this bug.

If you go to the reviews of Google's Clock app in the Play Store, you will notice that this app has been getting massive minus ratings for quite some time. Users criticize that wake-up calls are no longer alerted. The comments are almost the same, as the users below write: 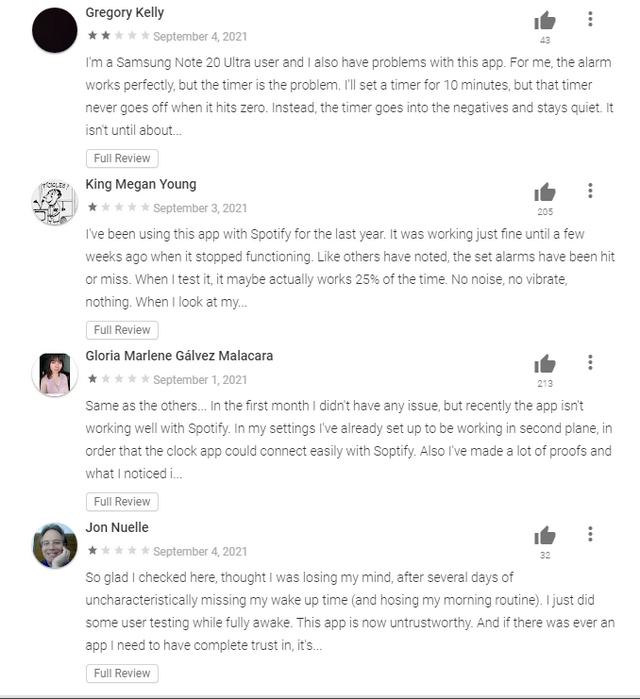 I'm a Samsung Note 20 Ultra user and I also have problems with this app. For me, the alarm works perfectly, but the timer is the problem. I'll set a timer for 10 minutes, but that timer never goes off when it hits zero. Instead, the timer goes into the negatives and stays quiet. It isn't until about 5 minutes later that the timer tells me time is up. Sometimes it never tells me until I open the app to see how much time is left. Please fix this because I like this app.

I've been using this app with Spotify for the last year. It was working just fine until a few weeks ago when it stopped functioning. Like others have noted, the set alarms have been hit or miss. When I test it, it maybe actually works 25% of the time. No noise, no vibrate, nothing. When I look at my phone, it says I've missed my alarm. More like YOU missed alarming me, clock app! Please fix this issue, I am tired of playing Russian roulette over if I am going to wake up on time or not.

Same as the others… In the first month I didn't have any issue, but recently the app isn't working well with Spotify. In my settings I've already set up to be working in second plane, in order that the clock app could connect easily with Soptify. Also I've made a lot of proofs and what I noticed is that the alarm only vibrates for 1 or 2 seconds and then turn off, even if the phone is in use. In other occasions at least the alarm sound was the classical "beep" sound, but now it doesn't.

So glad I checked here, thought I was losing my mind, after several days of uncharacteristically missing my wake up time (and hosing my morning routine). I just did some user testing while fully awake. This app is now untrustworthy. And if there was ever an app I need to have complete trust in, it's my alarm clock. It's too bad, because I liked the Assistant integration. But bye-bye.

Browsing the reviews, one might get the impression that this has only been the case "since recently". But it seems that the issue has been there for a while.  On reddit.com there is a longer thread, but related to the Google Pixel smartphone, reporting the failed alerting of the clock app. XDA-Developers addressed it on September 5, 2021 in this article. And I read, that it's not only related to Google Pixel, also devices from Samsung, Oppo or OnePlus are affected. One user mentioned above, that the Sporify app has something to do with the missing alarms.

Google is working on a fix

It is now clear that Google developers are aware of the bug and are working on an update to fix it. On reddit.com, a Google developer with the alias PixelCommunity wrote the following:

We're sorry you've been experiencing this issue, and thank you for reporting it. We've identified a fix and will roll it out soon. In the meantime, you can change the alarm sound setting to a selection within Device sound.

There is a discussion in the Google Issue Tracker, where someone points out that the issue is related by a conflict with the Spotify app (see also). Let's wait and see what Google provides as a fix and when. Any of you affected by this bug?

This entry was posted in Android, issue and tagged Android, App, issue. Bookmark the permalink.