[German]Microsoft now supports passwordless logins to Microsoft accounts. The company announced this in a blog post on September 15, 2021. This should make it possible to log in to Windows, Office or other Microsoft services via the Authenticator app without entering a password. Microsoft wants to increase the security of the systems with this step.

Logging in to Windows was previously possible via password, PIN or via camera using Hello. Logging in without a password should now also work via a Microsoft account. This is described in this Microsoft article – I came across the topic via the following tweet. 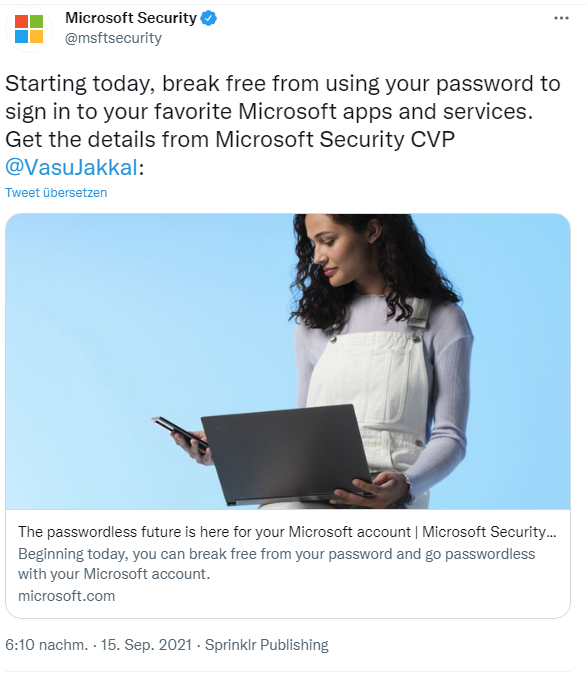 The problem Microsoft want to solve: Users don't like passwords because typing them is annoying and error-prone. Users can't remember these passwords and write them down – or use trivial passwords that can be guessed. The harvesting of passwords for online access is a prime target for phishing and cyber attacks. Security researchers therefore sometimes say: Hackers don't need to break into systems, they simply log in regularly and that's it.

On the other hand, passwords have been the most important security layer for access control to functions such as operating systems, mailboxes, Internet accounts, etc. for decades. However, the trend is moving toward passwordless user accounts, where authentication takes place via other means (two-factor authentication).

Back in March 2021, Microsoft announced that passwordless login was generally available for commercial users and that this feature was now ready for businesses around the world. As of now, users can now completely remove the password from their Microsoft account.

Instead of a password, the Microsoft Authenticator app, Windows Hello, or a security key or verification code sent to your phone or email can be used to sign in. This allows users to log in to apps and services such as Microsoft Outlook, Microsoft OneDrive, Microsoft Family Safety, etc. via a Microsoft account using the aforementioned authentication methods. However, this feature will be rolled out by Microsoft gradually in waves over the coming weeks..

First, the Authenticator app for Android or iOS must be installed on a device. Once the app is set up, the switch to a password less Microsoft Account can be made at account.microsoft.com via the Advanced Security Options -> Additional Security Options entries and the select Tunr non on Passwordless Account. Microsoft has published this blog post describing passwordless sign-in for Microsoft Edge and Microsoft 365 apps.